A projected 20-horse field will “Run for the Roses” when the 141st Kentucky Derby takes place this Saturday, May 2nd at Churchill Downs.

NBC’s Kentucky Derby coverage begins this Wednesday with the Kentucky Derby Draw at 5:30 p.m. Eastern on the NBC Sports Network. Post time for the Derby is Saturday at 6:24 p.m. and the race will be broadcast live on NBC.

This year’s projected Derby field is the best in recent memory with quality contenders throughout the top 20. This year’s early favorites were American Pharoah who won the Arkansas Derby, Dortmund who remained undefeated and a perfect six-for-six by winning the Santa Anita Derby, Carpe Diem who won the Blue Grass Stakes, Materiality, Frosted who won the Wood Memorial Stakes and Mubtaahij. Each horse dominated a significant portion of the Kentucky Derby prep schedule, which led up to this Saturday.

Here is the rest of the projected field for horse racing’s biggest race: 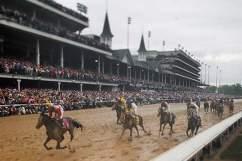 Two of the horses that were in Derby points contention until the end of the prep season were One Lucky Dane and Madefromlucky. One Lucky Dane was injured last week in a workout at Santa Anita Park, so trainer Bob Baffert officially pulled the horse from potentially running in the Derby and opted for surgery.

Todd Pletcher decided that not having Madefromlucky was a wise choice, opting to run Keen Ice instead.

The Kentucky Derby field may still be altered before now and the official draw on Wednesday. Should another trainer opt out one of the current top 20 horses projected to run, Nick Zito may have an opportunity to run Frammento in the race. 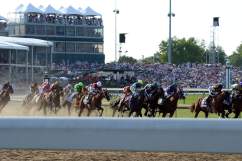