Andy Lee hits the mat in his fight against Peter Quillin. (Getty)

Andy Lee and Peter Quillin fought to a split-decision draw on Saturday at Barclays Center in Brooklyn.

The fight, which was originally for Lee’s WBO World middleweight title, was at the last minute deemed a non-title bout after Quillin was unable to make the 160-pound middleweight limit.

Quillin was in control for the first half of the bout, dropping Lee once in the first round and again in the third. But Lee was able to put his punches together as the fight wore on, dropping Quillin once, in the seventh round, and walked away with his title and a slightly anticlimactic conclusion to his trip to the States.

“I respect the decision,” Quillin said after the bout. “There is a first time for everything. I’m grateful that I was going to get dropped that I was able to get back up and fight. I came here to fight and I was able to go 12 rounds. I could have kept going. I took a year off, and the motivation of losing my title got me going.”

Quillin (31-0-1, 22 KOs) was previously in the ring outpointing veteran Lukas Konecny in April 2014. Prior to that, 31-year-old Quillin stopped Gabriel Rosado and decisioned undefeated brawler Fernando Guerrero. Quillin won the WBO middleweight title in 2012 by defeating Hassan N’Dam on the scorecards

Andy Lee (34-2-1, 24 KOs) came into Saturday’s fight having defeated Matt Korobov with a brutal sixth-round TKO in December 2014 to lift the WBO middleweight world title. Before the Korobov fight stopped John Jackson and outpointed Frank Horta. Lee has won his last six fights since his 2012 defeat at the hands of Julio Cesar Chavez Jr.

Going forward, Quillin will likely continue his climb up the rankings and his pursuit of another world title. Despite not walking away with Lee’s belt, the Brooklynite will be looking for future matchups against middleweight stars like Gennady Golovkin, Miguel Cotto Danny Jacobs, or Billy Joe Saunders. But, as all things in boxing these days, the decision will rest on mighty boxing adviser Al Haymon.

For Andy Lee, he will be looking to take his title back across the pond for possible face offs against Chris Eubank Jr. or Billy Joe Saunders.

“It was a tough fight,” Lee said after the bout. “He got me early, because I was being lazy. I got my momentum late in the fight because I boxed consistently. I understand with two knockdowns people felt he won the decision. I could have done better tonight.”

Check out the fight here: 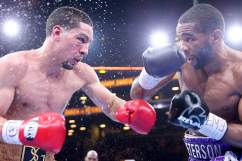 (scores are not official)

Refresh this page throughout the fight for round-by-round.updates.

Round 1: Ok, fight fans! First bout of the night. Lee black wears, Quillin in cheetah patterned trunks. Lee fights out of a southpaw stand. Fighter meet in the middle. Measuring. Both pumping the jabs, but not landing. Right hand Quillin to the chest. Minute in. Still vying in the center of the ring. Right hook and left from Lee counters Quilin. Both looking. Observing. Quillin right to head. Minute in, more feeling out. Straight left Lee. Lee is KNOCKED DOWN by Quillin right hand! Quillin 10-8

Round 2: Back in the middle, jabs are pumping. Left from Lee is short. Quillin measure his jab. Quillin lands with right-left combo. Minute in, more vying in the center of the ring. Half-way point. More of the same, low action, but tense. Lee slowly working the perimeter. Right hand Quillin.  Combo wings Lee. Measuring but not engaging. Quillin smashed Lee with a left hook and they go at it. Now back to watching each other. 20-17 Quillin

Round 3: Center of the ring. Lee short with jab. Quillin slowly pressuring. Big left from Lee. Right from Lee.  Hurt Quillin. Quillin on the ropes. Lee KNOCKED DOWN by Quillin right hand! Lee left hand.  Quillin with left hook. Lee lands a left to the face. Quillin  back in the corner, but Lee keeping his distance. Lee jab lands. Big left from Lee on the bell. 30-25

Round 4: Quillin moving well, looks energized. Lee misses jab to the body. Watching, looking for openings. Lee reaches with jab. Left hand Quillin. Half-way point of the round Quillin charges with combo, wing Lee. Minute left, Lee looking to close the distance, left hook-right misses from Quillin. Right to the body from Lee. Audience is booing the low action. Right to the body Lee. Jab to the body Quillin. 40-34

Round 8: Lee jabs to the body. Both fighters moving more, more intense. Lee, left to the body. Half-way point of the round. Left by Lee, countered by Quillin. Right to the body from Lee. Quillin misses with big lopping right. Right hook Lee around Quillin’s left. Good exchange of rear hands. Left from Lee. Quillin jab. Quillin right. Good round for Lee. Especially the beginning. 76-71 Quillin

Read More
Boxing, NBC
Andy Lee and Peter Quillin fight to a split-decision draw on Saturday at Barclays Center in Brooklyn. We have your result, highlights, and wrap-up.