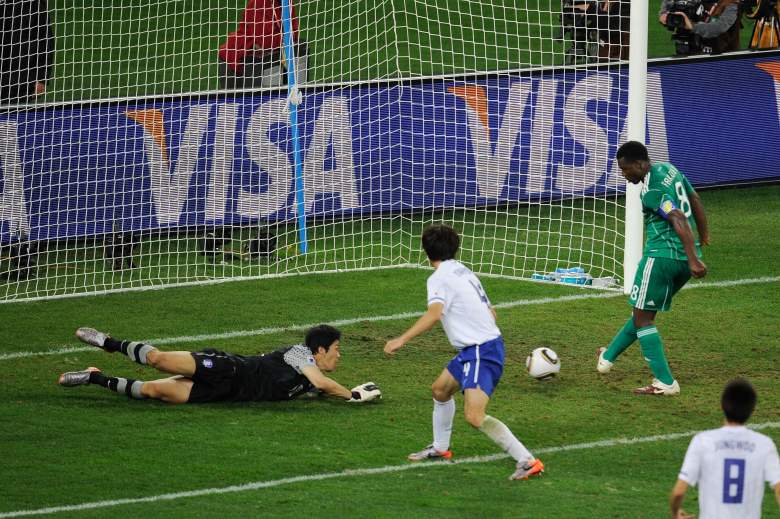 Yakubu had a miss to remember at the 2010 World Cup. (Getty)

Wonderful strikes are great to watch and all, but equally enjoyable is watch players snatch defeat from the jaws of victory. Scoring goals is a difficult task — which is why such a premium is paid for goalscorers — and when you get into the position of firing the ball into an empty net with all other work done, finishing is just something you have to do.

Unfortunately these 10 did not, and will be remember far more than if they had converted their respective chances.

Here are the top 10 worst misses of all time:

Ilija Sivonjic begins the list and there is likely not a miss in the history of the game that came from a closer distance to the goal line. Playing for Dinamo Zagreb in 2009, Sivonjic managed to not only halt the progress of the ball instead of making forward contact with it in the 33rd minute, but he stopped the ball dead in its tracks as it was heading across the line.

Dinamo Zagreb, who will claim a 10th straight Croatian League title this season, was held to a 1-1 draw at home that day by Cibalia Vinkovci thanks in large part to Sivonjic’s heroics.

1. FC Kaiserslautern striker Phillipp Hofmann was so close to the empty net when the cross reached his feet, it would have been less difficult to score than miss. Well that’s exactly what he did as he looped a shot over the bar from less than two meters out.

Fortunately for Hoffman, his team still earned a 1-0 home win over Union Berlin last September and his blushes in the second half were spared. Hofmann still plays for Kaiserslautern, a team trying to get promoted to the Bundesliga

Sometimes players can miss open goals because the ball is coming at them so fast or on a tricky bounce. Former Liverpool player Ronny Rosenthal cannot claim such misfortune.

In Liverpool’s match away to Aston Villa in 1992, Rosenthal had an unimpeded path to the goal and even had time to control the ball before getting his shot off. Unfortunately that shot rocketed off the crossbar and the moment was immortalized.

It wasn’t Liverpool’s day as Aston Villa claimed a 4-2 win.

In injury time of a 2-1 defeat at home against Middlesbrough in November, 2004, West Brom forward Nwankwo Kanu had the chance of all chances to tie up the match. Unfortunately his touch was lazy and he missed badly.

The match also happened the be the debut at WBA for Bryan Robson, who spent about 18 months with the club. The miss and defeat didn’t hurt the Baggies, who climbed out of relegation trouble and survived by a single point.

6. Steve Stone Sent One Into Stands

Former Nottingham Forrest winger Steve Stone had a horrid miss in a 1997 away match against Reading while trailing 1-0 in the first half. The game ended in a 3-3 draw and Stone showed why he has just 37 career goals in 368 games.

Some poor misses don’t mean much in the grand scheme of things, perhaps the result isn’t affected or the teams playing don’t have much at stake.

That does not apply to this miss, as Fahad Khalfan Al Bloushi had a glorious chance to help Qatar advance to the semifinals of the 2010 Asian Games, held in November in China. With the match 0-0 and appearing to be headed to extra time, Al Bloushi missed a wide open net against Uzbekistan. Uzbekistan would win the match 1-0 in extra time.

4. Forlan Fired Wide With No One To Beat

In a summer 2003 friendly at Giants Stadium in East Rutherford New Jersey, Manchester United and Juventus battled it out in front of a packed house. The fans saw many of the top players in the world at the time, but they also witnessed one of the worst misses of all time.

Uruguayan forward Diego Forlan scored just 10 goals in 63 appearances for the Red Devils, and is largely viewed as a bust in the English Premier League. He went on to have an outstanding career internationally and domestically, scoring more than 100 combined goals with Villarreal and Atletico Madrid

It had no affect on the result as Manchester United prevailed 4-1.

Representing your country at the highest level is a dream come true for most. For Yakubu, then of Everton, that dream turned into a nightmare during a 2010 World Cup group stage game against South Korea in South Africa.

Although he did miss this golden chance, he converted a penalty later in the match to earn a 2-2 draw. Nigeria would finish bottom of the group and miss out on the knockout round.

Yakubu has made 57 appearances for Nigeria.

2. Algerian League Produced Something to Remember

In 2013, Ali Sami Yachir took advantage of a goalie miscue and closed in on the empty net in MC Alger’s match against CR Belouizdad. However, fate intervened and Yachir fired his shot wide of the goal.

MC Alger pulled out a 2-1 win in the match, but there’s only one last memory from this 90 minutes.

Jon Dahl Tomasson has accomplishment plenty in his career, but at or near the top of the list has to be a miss for the ages playing for Feyernoord at home against NAC Breda towards the end of the 1998-1999 season. The match ended in a 2-2 draw, but Feyernoord had already locked up its 9th Eredivisie title in club history.

Read More
Soccer
For all the wonder goals scored in the history of the game, there have been countless misses that have been equally as jaw-dropping.