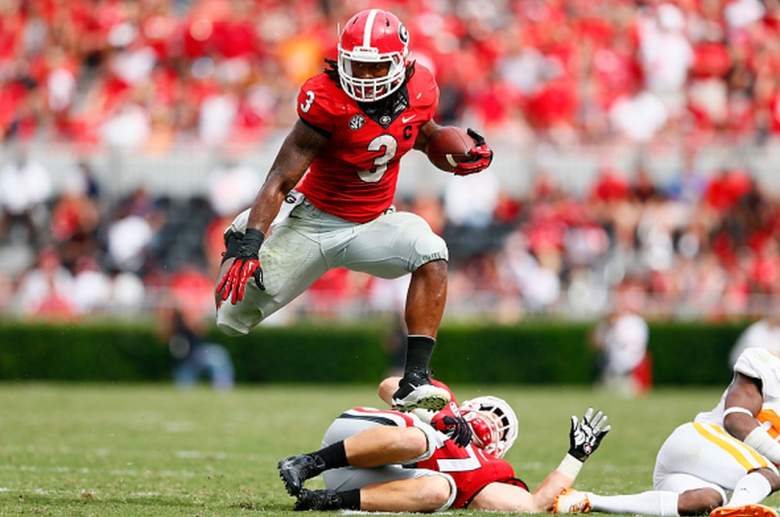 It’s a name the college gridiron has become quit accustomed too, especially throughout the 2014 season. And with a very talented class of running backs, and despite the ups and downs, this RB is still among the elite and considered one of the best.

His name is Todd Gurley, and here’s what you need to know about the Georgia RB turning pro: 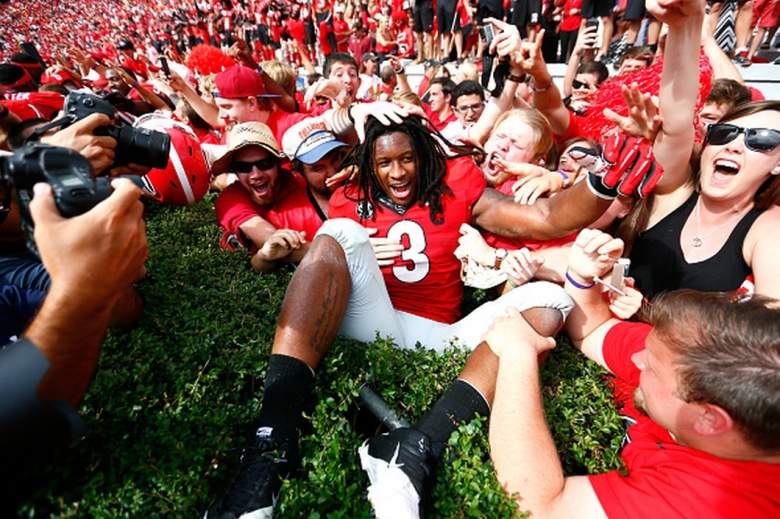 This past season – his junior year – Gurley started out hot against Clemson – rushing for 198 yards and tallying three touchdowns on 15 carries. But after starting the first five games, the NCAA put a damper on his playing time. The 6-foot-1, 222-pound RB violated NCAA rules by accepting more than $3,000 in autograph memorabilia and as a result, suffered a four-game suspension.

But the four-game hiatus didn’t seem to make much a difference for his on field success as Gurley came out against Auburn to rush for 138 yards and one TD on 29 carries before suffering another setback.


2. After His Suspension He Torn His ACL 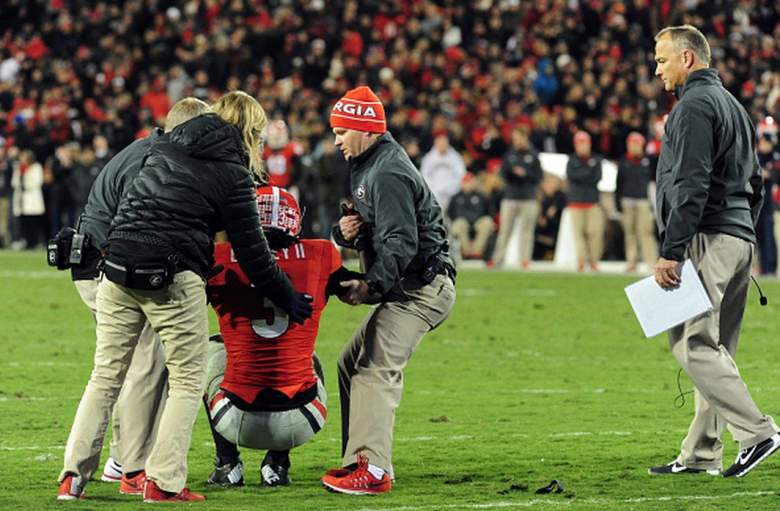 That other setback was a torn ACL. Gurley started the game against Auburn hot, but was left hobbling out of Sanford Stadium following the 34-7 win. With just over 5 minutes remaining in the game, Gurley was tended to by trainers on the field for a sore and injured knee. He would later find out that it was more than a sprain, he torn his ACL, which ended his season.

Out of the 13 games for the Bulldogs, Gurley played in six of them and finished with 911 total yards, 123 carries and nine TDs.

As a sophomore, Gurley played in 10 of the 13 games – he missed three because of an ankle injury. He totaled 989 yards, 165 carries and 10 TDs. His highlight of that year was in the opening game against Clemson when he finished with 154 yards rushing and two touchdowns, including a 75-yarder on his first carry of the season.

In 2012, selected second-team All-SEC, Freshman All-SEC and was the second freshman to rush for 1,000 yards in Georgia’s history – the first was Herschel Walker in 1980. Gurley also set the Georgia freshman record with 17 rushing touchdowns. 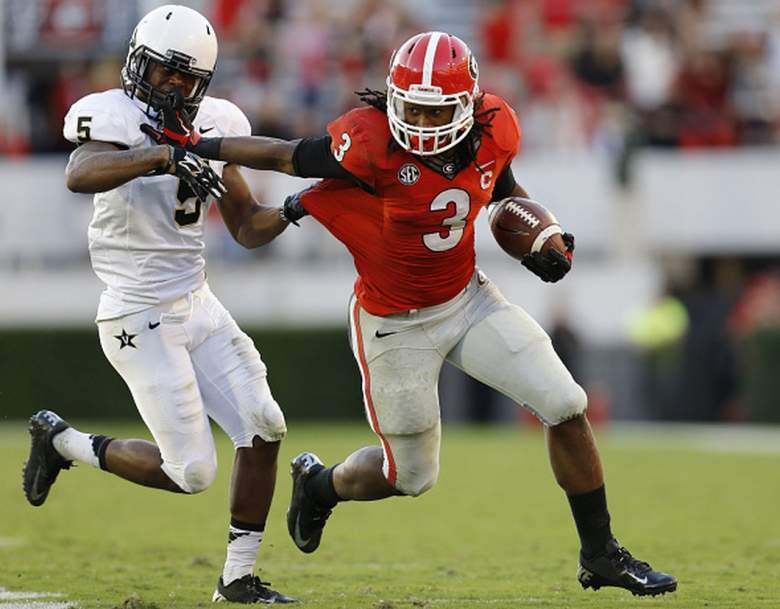 According to ESPN, Gurley is projected to go as the 23rd pick in the first round.

If that is the case, the North Carolina native would be heading to Michigan to join the Detriot Lions organization. And according to Michael Rothstein:

The Lions have bigger needs along both the offensive and defensive line, but general manager Martin Mayhew’s strategy has always been to take the best player available (other than quarterback). In Gurley, Mayhew gets a player he called an “outstanding prospect” and someone who could immediately solidify the team’s running game. Mayhew spent “a lot” of time on him and the Lions brought him in for a pre-draft visit. If Gurley is around at No. 23, it would be surprising and possibly leave the Lions very, very happy.

4. He Was a Standout Three-Sport Athlete in High School

Gurley attended Tarboro High School in Tarboro, North Carolina, where he stood out on the gridiron, the hardwood and the track.

In football he played as a running back and defensive back and helped lead his team to three straight 2A State Championships. As a junior he totaled 1,472 rushing yards, 26 touchdowns, 79 tackles, an interception and a forced fumble. At the conclusion of that 2010 season, he was named Rocky Mount Telegram All-Area Offensive Player of the Year.

As a senior in 2011, Gurley helped his team win the 2A North Carolina state championship over Lincolnton High School – he rushed for 242 yards and four TDs. Throughout his senior season, Gurley totaled 2,600 yards and 38 TDs and was the North Carolina Associated Press Player of the Year.

Gurley also got it done on the track as he competed for Team USA in the 110-meter hurdles at the 2011 World Youth Championships in Athletics. Although he finished 3rd in the prelims with a career-best time of 13.66 seconds, he was 15th overall in the semifinals. And in the 100-meter dash, Gurley ran a personal-best time of 10.70 seconds in the prelims of the 2011 NCHSAA 2A State Track Meet, which gave him a second place finish.

5. He Is Dating Olivia Davison 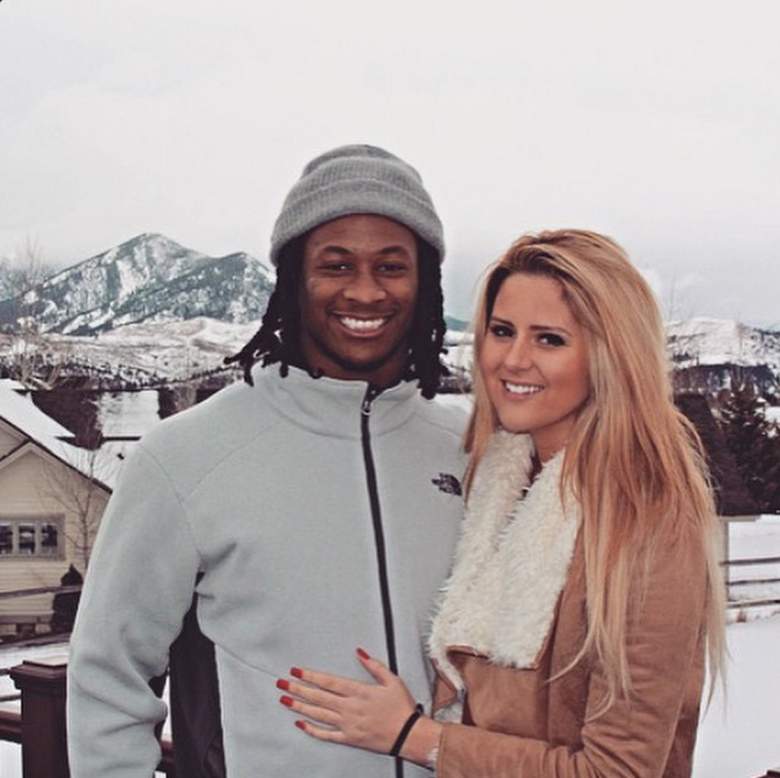 The 20-year-old RB has been dating 21-year-old Olivia Davison for over two years, according to his Instagram.

After being bombarded by the media during Gurley’s NCAA violation suspension, Davison and Gurley cut back on their social media postings. However, they still post plenty for fans and wonderers to find. 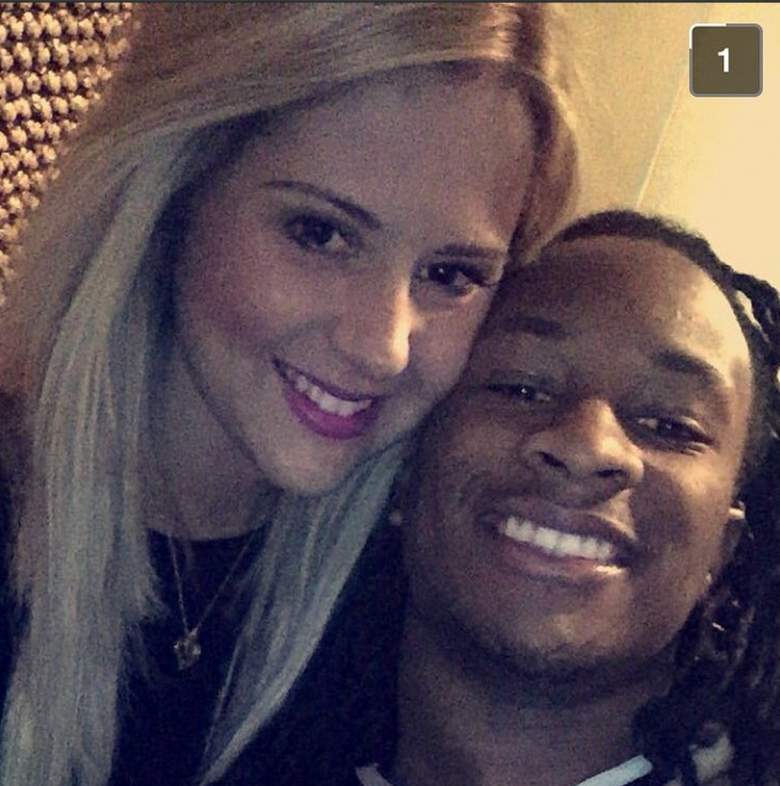