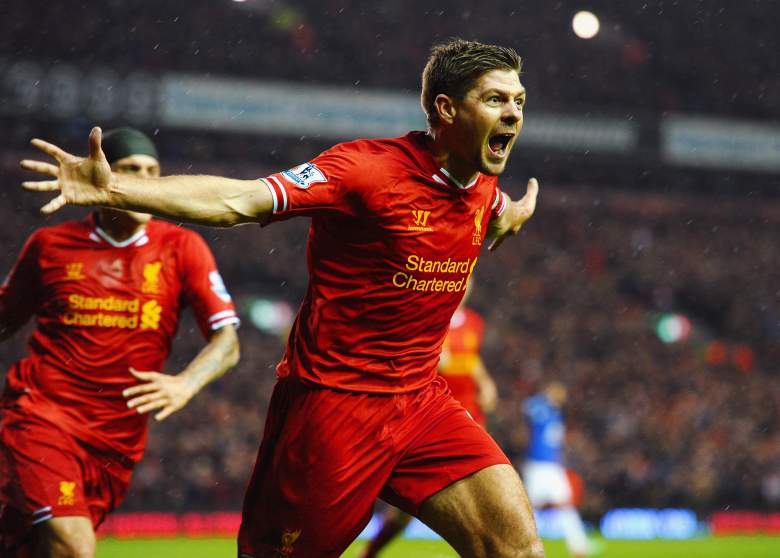 Steven Gerrard celebrates after scoring a goal against Everton at Anfield in January 2014. (Getty)

Steven Gerrard, the 34-year-old captain of the English Premier League’s Liverpool FC, has spent his entire professional career playing for the Reds. But that’s going to change this July when he moves across the pond to Los Angeles to play for Major League Soccer’s LA Galaxy. After spending 17 years at Liverpool, a dozen of which as captain of the team, earlier this year the native Liverpudlian accepted an 18-month contract with MLS as the team’s designated player.

Gerrard has been on the winning side for many titles, including the FA Cup, the Football League Cup, the UEFA Europa League, the UEFA Super Cup and, most victoriously, he steered the Reds to clinching the 2005 Champions League honors against A.C. Milan. However, the skipper has never won a title in the English Premiere League. Individual honors include UEFA’s Most Valuable Player in 2005, a nomination for the prestigious Ballon D’Or award, PFA Player of the Year and Football Writers’ Association Footballer of the Year. He made 38 appearances as captain of the England national team as well, until announcing his retirement from international football last July.

Legendary French footballer Zinedine Zidane famously called Gerrard the best player in the world in 2009. Of course, such a claim was highly contested by rival Premier League teams and supporters from the likes of Manchester United and Chelsea Football Club. Most recently, naysayers have cited as evidence a match against Chelsea last April in which a slip from the Reds’ captain arguably caused him the EPL title. As you might have guessed, they’ve written songs about it.

But no matter, Stevie G is coming stateside. Here’s what you need to know about him leading up to his adventures in Tinseltown:

1. Gerrard is Married to Model Alex Curran & Has 3 Daughters

In April 2013, Alex Gerrard was announced as the face of Lipsy VIP. (Getty)

Alex is not just a WAG. She’s a fashionista. The 32-year-old model launched her own fashion line in September 2010, teaming up with Forever Unique to create a 16-piece collection, according to the Daily Mail. In March, Alex was named as ambassador to the liquid iron supplement Spatone, and in the photo above she’s posing as the face of London-based fashion brand Lipsy VIP. She has written a fashion column for the UK’s Daily Mirror called “Go Shop With Alex Curran.” Apparently she’s thrilled to be moving to LA and recently attended the Grammys during a visit to Hollywood.

Steven Gerrard walks his three daughters of the pitch prior to the Steven Gerrard Testimonial Match between Liverpool and Olympiacos at Anfield in August 2013. (Getty)

Judging by his Instagram, Stevie is a super proud papa of beautiful blond daughters, Lilly-Ella, Lexie and Lourdes.

2. His Future Digs Will Be a Mansion in Malibu

Once they touch down in LA, the Gerrard family will reside in a mansion in Malibu for the modest price tag of $20,000 a week, the Daily Mirror reports. This home is so epic that it has its own twitter account (starring its fridge) with 15,000 followers, the Soccer Gods of Fusion pointed out.

Perhaps I can be in #zoolander2. I’ve been told I am really, really, ridiculously good looking. Not #ShelfCentered ? pic.twitter.com/zp1cQI6bsu

The house has also been featured on Real Housewives of Beverly Hills. Check out more photos at the Daily Star, which reports that L.A. Galaxy is going to foot the bill for Gerrard’s 18-month stay.

3. He Is 34 Years Old & Wants to End his Career With a Championship at LA Galaxy

After weeks of rumors and speculation of an possible move to MLS, in January 2015 the L.A. Galaxy officially announced that it had signed Gerrard as a designated player. And he’s looking to win a championship while he’s in the U.S. In Los Angeles he will join former teammate and Irish player Robbie Keane, named the 2014 MLS MVP, and Omar Gonzalez, a 2014 MLS Defender of the Year Finalist. All three are designated players under coach Bruce Arena.

Steven Gerrard in the director’s box before the January, 2015, FA Cup match between Liverpool and Bolton Wanderers at Anfield. (Getty)

He’s taking quite the salary cut with $9 million for two seasons, but with a potential new mansion, Los Angeles sunny climes, a new celebrity lifestyle and a team that knows how to win championships, who can blame him. Gerrard will be a designated player at L.A. Galaxy, a side that has won three out of four past MLS Cups. And while he’ll make roughly half of what he was making at Liverpool, reported by Forbes at $18.7 million for 2014, he will be one of the highest paid DP’s in MLS.

5. Many a Liverpool Song Has Been Written About Him

Liverpool supporters singing before the FA Cup semi-final football match between Everton and Liverpool in London in April, 2012. (Getty)

“You’ll Never Walk Alone” is the official Liverpool FC anthem, but Gerrard himself has plenty of his own. Whether you want to celebrate his loyalty to Liverpool or his skill with free kicks and long passes, there’s a Steven Gerrard song for you. Here is one of the more popular chants (expletives included):

And here’s a comprehensive list of Liverpool and Steven Gerrard songs.

Read More
5 Fast Facts, Soccer
Longtime captain of Liverpool FC Steven Gerrard will leave the Reds and join L.A. Galaxy in Los Angeles come July. Here are 5 things you need to know about the legendary midfielder before he arrives in the U.S.