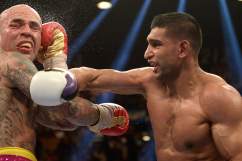 Khan, 28-year-old, was last in the ring outpointing Devon Alexander in December of 2014. Going into the Alexander bout, Khan had beaten tested warriors Luis Collazo, Julio Diaz, and Carlos Molina. Amir’s most recent defeat came at the hands of Danny Garcia in 2012.

“I have happy memories of New York having made my successful U.S. debut there against Paulie Malignaggi in 2010,” said Olympic silver-medalist Amir Khan. “I’m delighted to now be fighting there once again against another champion in Chris Algieri. Algieri has shared the ring with some tremendous fighters and shown great skills in those fights so I know I will need to be at my very best when we meet. In all my fights I bring excitement, speed and skill and can guarantee more fireworks on May 29 at Barclays Center.”