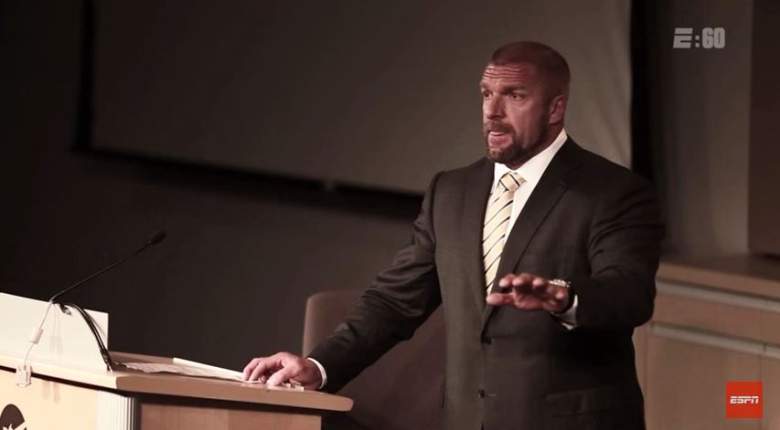 ESPN’s E:60 special “WWE: Behind the Curtain’ officially aired on Tuesday night, May 5th at 8 p.m. on ESPN, and included interviews with WWE on-screen and production talent.

In the documentary, the ESPN E;60 crew took a deeper look into the inner-workings of the WWE, specifically with their new developmental program called ‘NXT.’ NXT is part of WWE’s programming schedule for their award-winning WWE Network, is taped at Full Sail University in Orlando, Florida and airs every Wednesday night at 8 p.m. Eastern.

NXT has been designated as a place where talent can perform in a small environment, get experience in front of a live crowd and fine tune their craft, which in the world of WWE means your in-ring skills, character development and abaility to speak on a microphone.

“WWE: Behind the Curtain” gives the viewer an interesting first-hand look at the inner-workings of the WWE from essentially the bottom level of the ladder. Here are a few things to know about the documentary: 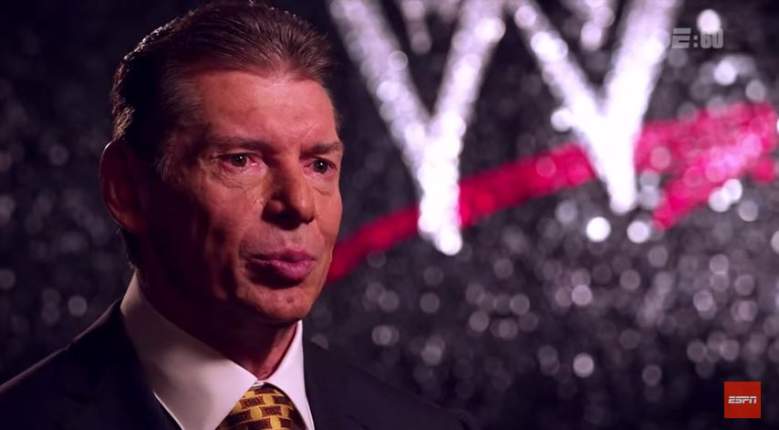 Everybody familiar with WWE programming knows of WWE’s Owner Vincent Kennedy McMahon, the man responsible for turning the company into the media conglomerate it is today. Even though McMahon is responsible, it was another prominent man, WWE COO Paul Levesque — better known to wrestling fans as “Triple H” — who was featured as the prominent focal point. Superstars like Hulk Hogan and Dwayne “The Rock” Johnson also made brief appearances for the documentary.

After being an active superstar for almost 20 years, Levesque has since taken a backseat into a more corporate role in recent years. He is much more hands on when it comes to talent relations and producing and promoting WWE programming. He was the mastermind behind WWE’s developmental program NXT, which was previously known as “Florida Championship Wrestling.” Other noticeable talent like Jim Ross, Dusty Rhodes, Michael Cole, Michael Hayes and former NXT Head Trainer Bill DeMott — who has since been fired — were all filmed during private production meetings giving feedback info on the superstars.

Over the years, WWE’s main developmental territories have moved and changed. From Ohio Valley Wrestling (OVW) to Florida Championship Wrestling (FCW), now the one brand has become “NXT.” So, who were the superstars of the documentary? “WWE: Behind the Curtain” introduces three men: Raymond Leppan (Leo Kruger and Adam Rose), Austin Watson (Xavier Woods) and Matthew Polinsky (Corey Graves).

The documentary timeline starts roughly around 2011, while some of these superstars are still in NXT. Over the past four years, each superstar describes their own personal story and what they’ve had to experience to try and get called up to WWE’s main roster.

3. Raymond Leppan Went Through Several Characters Before Making it Work 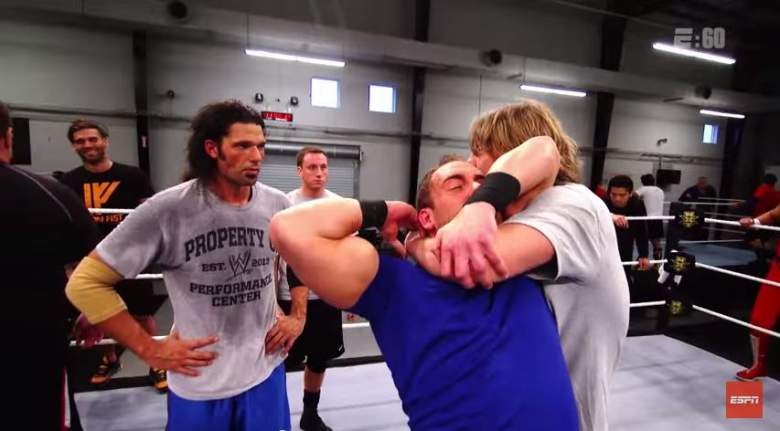 E60 introduced Leppan’s perspective of being the professional wrestler who has a family to support. The 35-year-old is no spring chicken by wrestling standards, and has a three-year-old son Maverick who has needed multiple surgeries through his young life and will require more in the future.

In the world of WWE not everything that works in front of a smaller NXT crowd will work in front of a larger, live television audience. Leppan’s first character in NXT was a character that was a throwback to the late 80s/early 90s and more of an extension of himself and his South African heritage, Leo Kruger. Although Kruger was popular, he ultimately lacked that dynamic edge that usually makes the crowd connect with somebody on the main roster.

After being given an ultimatum, Leppan went through about 10 different characters before settling on a revamp by the name of Adam Rose, an 80’s pop star in the mold of Russell Brand who just loves to party. The character went over well with the NXT live audience on his debut night, and he was called up to the main roster just four months later.

4. Austin Watson Is Looking to Become the Sherlock of WWE 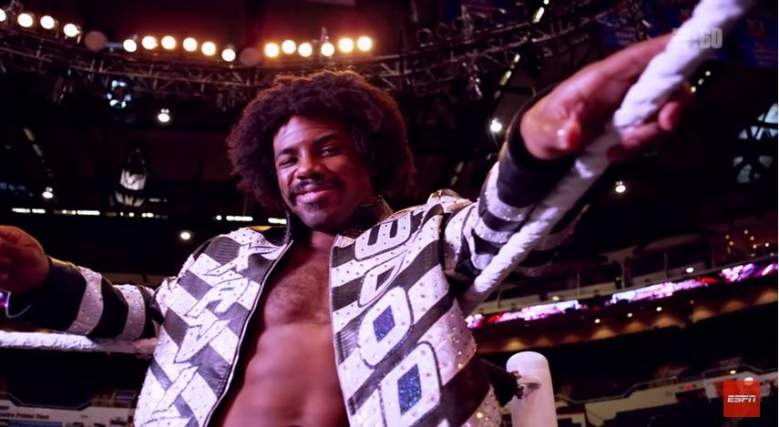 Sherlock Holmes is pushing it, but as “Behind the Curtain” showed the world, Watson is looking to obtain his PHD in Psychology, and looking to do so while being an active member of the WWE roster.

Xavier Woods was always in the plans for WWE, specifically Triple H. Woods boasts a unique skill set. He’s charismatic, but more importantly, he’s articulate and intelligent when he speaks on the microphone. Woods is the perfect type of personality the WWE loves to have do promotional events because of how well-spoken he is.

Woods’s time in NXT was the most brief of the three superstars, but that didn’t mean he didn’t go through his struggles. Once he got to the main roster, Woods was lost and the crowd didn’t care for him, which meant threatening to have his spot taken away and being demoted back to NXT. Woods eventually tweaked his character and is the “brains” of WWE’s current trio of New Day with Kofi Kingston and Big E. Together, they’re the WWE Tag Team Champions and defending the title under the “Freebird Rule.”

5. Polinsky’s Career Was Cut Short Before It Even Started 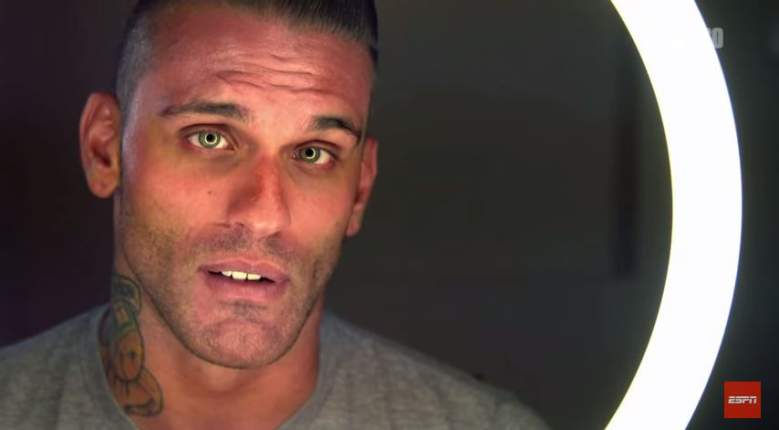 Corey Graves is one of the WWE Network’s most popular personalities. (YouTube/ESPN)

Like Leppan, Polinsky is married and now with three children. Growing up in Pittsburgh, Pennsylvania and working on the Indy circuit, all he dreamed about was becoming a pro wrestler.

In 2011, Polinsky got his chance and started wrestling under the old FCW label. Throughout the years, the tattooed-crazed “Corey Graves” became one of NXT’s most popular superstars and instantly became somebody the fans could relate to — the average, punk rocker kid, similar to the mold of what CM Punk had become for the company on the main roster. Graves was a performer who was looked at in high-regard.

However, his WWE dreams didn’t come true. Several concussions revealed to the WWE’s medical staff that he was not healthy enough to compete and invest in long term. In the documentary, Triple H reveals to Graves that the WWE can’t go on with him as a superstar, which causes Graves to break down. The silver lining is that Graves was offered a two-year contract to become an NXT announcer, a job that he has since excelled at since he began late last year.

Graves also has his own program “Culture Shock” which airs on the WWE Network.