When pint-size dynamo Manny Pacquiao takes on boxing great Floyd Mayweather Jr. on May 2, the man giving the orders in the Filipino’s corner will be famous trainer Freddie Roach.

Here’s what you need to know about the Hall of Famer and seven-time ‘Trainer of the Year’:

55-year-old Freddie Roach began his career as cornerman in 1986, under the tutelage of renowned boxing trainer Eddie Futch. Since then, Roach has gone on to train 27 world champions including Manny Pacquiao, Oscar De La Hoya, Miguel Cotto, and Mike Tyson.

Roach is an offensive-minded trainer who prefer his fighters press forward and exchange, instead of “hitting and not getting hit.” He has a reputation for reinventing established boxers and helping them take their fight game to the next level.

When Manny Pacquiao came to Roach, he was one-armed brawler relying solely on his left hand to oust his opponents. Roach turned Pacquiao into one of the most complete boxers in the sport.

In 1990, Roach began showing symptoms of Parkinson’s Disease, a progressive disorder of the nervous system that gradually affects movement.

“I shake a little bit, which is embarrassing, and I can’t walk that well,” Roach told the Guardian. “But once I get into the ring I can go all day, Some doctors say that the damage is done, that it can be maintained at this level. Others tell me it’ll get a lot worse. It is part of my life now and I just have to live with it. Some people just want to lay down and die, but not me. I’m a fighter.”

Watch Roach talk frankly about his life with the disease:

3. Back During His Pro Boxing Days, Roach was a Respected ‘Opponent’

Growing up in Dedham, Massachusetts, Freddie and his brothers Pepper and Joey were taught the sweet science of bruising by their old man, Paul Roach, himself a New England featherweight champion in 1947. Having taken the boys as far as he could, Roach Sr put them under the charge of New England trainer Tariq Nasiri.

Known as the ‘The Choir Boy’ back then, 5-foot 5-inches tall Freddie turned professional in 1978 and went on to win his first 10 fights. By the time Roach retired at age 26, he had professional record of 40-13, with 15 victories by way of knockout.

In 1986 Roach unsuccessfully challenged Darryl Tyson for the WBC Continental Americas lightweight title. His last fight  was in 1986 against palooka David Rivello.

“I tried to be the world champion as best I could, but I came up short,” Roach told Hollywood Reporter. “So I was a little disappointed. But then I found something that I do better than boxing, and that’s training.”

Freddie Roach doesn’t limit himself to training boxers.Since 2008, Roach has been taking MMA fighters under his charge and finding success in the octagon. Since working with Andrei Arlovski in preparation for his fight against Ben Rothwell, Roach has seen a steady stream of MMA’ers coming through his gym, including Georges St. Pierre,  BJ Penn,Anderson Silva, Dan Hardy, Tito Ortiz, and Rameau Thierry Sokoudjou. 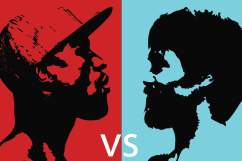 Mayweather-Pacquiao: By the Numbers (INFOGRAPHIC)

5. Freddie Roach is the Boxing Trainer to the Star

Nowadays, when preparing for boxing roles, movie stars turn to none other than Freddie Roach. Convenient for the Hollywood crowd, Roach’s Wild Card Boxing Club is located in Los Angeles, a stone’s throw from Sunset Blvd and has seen the likes of Mark Wahlberg (training for the film The Fighter), Mickey Rourke, and Boardwalk Empire’s Michael Pitt.

Watch Roach talk about his relationship with Mickey Rourke: