Anaheim Ducks center Ryan Getzlaf is already one of the NHL's best centers and captains. He is revered for his leadership and being the franchise player for the Ducks -- Getzlaf has won two gold medals with Team Canda (2010, 2014) and a Stanley Cup (2007).

Ryan is also married to his wife, Paige. Together the couple married in 2010 and have three children together, two sons, Ryder and Gavin, and a daughter. Their youngest is daughter Willa who turned a year-old last month.

Paige is one of the NHL's most supportive and known player wives, and routinely posts pictures of her and her husband together out or with their children on her Twitter account, which can be found at: @paige_getzlaf. The following images in this gallery are pictures of Paige with Ryan and her three children and are from Tumblr and her Twitter page. 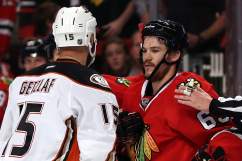 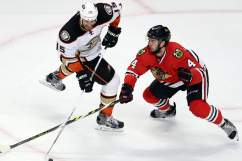 How to Watch Blackhawks vs. Ducks Game 7 Live Stream Online

Read More
Breaking News, Hockey, NHL
Anaheim Ducks center Ryan Getzlaf is 1 of the NHL's best players at his position. He's also married to his beautiful wife Paige and they have 3 children.