After losing the 2011 Women's World Cup final to Japan the United States Women's National Soccer Team atoned for their loss in Canada for the 2015 World Cup which began on June 6, 2015. The United States opened with Austrailia on June 8, 2015 in Winnipeg, Canada. They played in the so-called "Group of Death"including Nigeria and Sweden, as well as the aforementioned Austrailia. The USA was ranked second the world, the Swedish team was ranked fifth, the Austrailians were 10th, and Nigerians were 33rd. The United States won the group and moved on to win the title over Japan.(Getty) 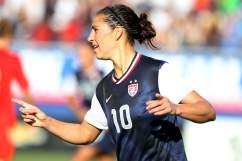