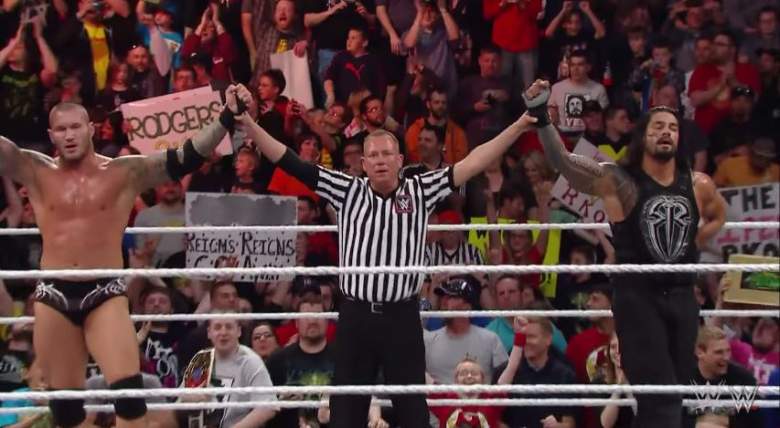 The WWE is on the road to Payback for many WWE superstars and this week’s Monday Night RAW stopped in the Bell Centre in Montreal, Quebec. The Bell Centre has not been a pleasant place over the last few days due to the resident Canadiens going down 0-2 to the Tampa Bay Lightning in their best-of-seven second round Stanley Cup Playoffs series.

The Habs would sure like some Payback… as would a certain handful of WWE superstars.

How does Seth Rollins react to Kane screwing him and having the WWE Universe decide his fate for Payback… in the form of a triple-threat match with Randy Orton and Roman Reigns. Who will strike the first blow this week: Cena or Rusev? And will Rusev make his presence heard in John Cena’s U.S. Championship defense again tonight. Does Dolph Ziggler get what he want: another crack at Sheamus?

Here is how Monday Night RAW went down throughout the night (Hint: It was the bet RAW of the year).

Monday Night RAW opened with a 3-on-2 handicap match between the New Day vs. Roman Reigns and Kane. Reigns and Orton dominated most of the match, as they looked to get on the same page just 13 days before their match at Payback.

Towards the end of the match, Reigns looked to hit a Spear on Kofi Kingston but accidentally hit Randy Orton. Big E pulled Reigns out of the ring and Kofi got the 1-2-3 on Orton for the upset.

Kane came out after and made the night’s main event: a match between Randy Orton and Roman Reigns.

Ryback came down to the ring to conduct a one-on-one interview with Renee Young about Bray Wyatt’s calculated and targeted attack on the Big Guy after his match with Bo Dallas last week on Monday Night RAW. Ryback didn’t back down and challenged Wyatt.

Wyatt eventually interrupted Ryback because (of course) Wyatt wanted to make a point that his attack was for a purpose:

Ryback is one of the most intimidating superstars the WWE currently has on its roster, but Wyatt fears nobody and continues to attack superstars when he thinks it’s right. Wyatt told Ryback to “run.”

Seth Rollins vs. Dean Ambrose Has High Stakes for the Winner

It’s a match that Seth Rollins DIDN’T want, but was made anyway — a rematch of Friday Night’s Smackdown main event. Rollins, with the help of the Authority, defeated Ambrose. After the match, Reigns came out and helped scatter the Authority away, standing in the ring with tall with Ambrose.

Ambrose has never defeated Rollins one-on-one. Can Ambrose sneak his way into the Payback main event?

Dean Ambrose vs. Seth Rollins, once again, had one of the best matches of the year, just like their previous matches last year. Ambrose vs. Rollins was a back-and-forth affair that continuously spilled to the outside.

Late in the match, Rollins power-bombed Ambrose into the barricade on the side, but Ambrose barely made it in to avoid losing by count out. J&J Security would come down to the ring and interfere, but Ambrose avoided them and was able to take care of a distracted Rollins with a school boy for the 1-2-3.

What a Monday Night RAW, so far!

Rusev Defeated Fandango Easily in a Tune-up Match Before Payback

The story of the match, however, was Lana continuing to play to the WWE Universe in the Bell Centre tonight. Fandango’s theme is catchy, and Lana quietly danced to Fandango’s theme when Rusev wasn’t watching.

You want him? YOU GOT HIM!!! @iLikeSamiZayn vs @JohnCena for the #USTitle!! #RAW @WWENXT pic.twitter.com/AzwaSZJqZ8

The Twitterverse was so amped to see Zayn’s official WWE debut:

Goosebumps all over for this moment for @iLikeSamiZayn !!!!! #RawMontreal @WWE

GOOSEBUMPS FOR DAYS!!!!! @iLikeSamiZayn is out to a THUNDEROUS ovation to face Cena! Not to mention the Bret Hart rub…holy shat. #RAW

Wow!! I have goosebumps!! @iLikeSamiZayn on #RAW for the #USTitle!!! @WWENXT is TAKING OVER!!!

Zayn didn’t hold back and used his full arsenal of moves to try and defeat the U.S. Champion.

The crowd was firmly on the side of Zayn, causing Cena to be thrown off of his game a bit. Cena had a few surprises of his own, including the springboard corner stunner that he first used against Rusev at Mania that has since been added to his moveset. After the stunner, Cena hit a second Attitude Adjustment for the 1-2-3. After the match, Cena left the ring and allowed Zayn to take in the Bell Centre crowd’s ovation for the NXT superstar — a cool gesture and an all-around awesome moment thanks to the champ.

The co-main event of RAW tonight deatured the newly crowned King of the Ring Bad News Barrett (who dropped the ‘Bad News’ from his nickname) and sheamus against Dolph Ziggler and Neville.

Barrett ended the match when he connected on a Bullhammer Elbow from Neville off of the top rope.

Which of the #Fatal4Way competitors at #WWEPayback got the last laugh on @WWE #RAW? Find out here… http://t.co/Lefh4b7FgG

The main event of tonight’s Monday Night RAW was Roman Reigns vs. Randy Orton with Jamie Noble as the special enforcer and Seth Rollins as a guest on commentary (yay!)

Fast forward to the end of the match; authority gets involved, Orton and Reigns fight back, Reigns planchas over the top rope and takes everybody out except Rollins who throws him into the ring post. Authority continue to beat up both men until DEAN AMBROSE CAME OUT FOR THE SAVE TO A HUGE POP.

Dean made a beeline for the ring and immediately too out Seth. Seth was left to fend 3-on-1 until he backed up right into a Reigns’ spear. The opportune Viper hit an RKO on Reigns and Ambrose answered immediately after with Dirty Deeds, and was the last man standing in the ring to close out an excellent Monday Night RAW.

In case you missed it, here is what happened on last week’s edition of Monday Night RAW:

Seth Rollins Is a Marked Man

In a WWE Universe poll — a decision made by Corporate Kane — more than 70% of fans chose to have Rollins defend his WWEWHC in a triple threat at Payback.

First, Rollins had to get through Smackdown. With help from the Authority, Rollins once again defeated his Shield brethren Dean Ambrose in the main event of Smackdown. However, after the match Roman Reigns came down to the ring with a thunderous presence and made a beeline for Rollins and the rest of the Authority. Reigns helped clear the ring and stood tall with his friend Ambrose as Smackdown went off the air.

How will Rollins react to Kane’s continuous betrayal and will he use Triple H and Stephanie McMahon to try and weasel out of his title defense in just under two weeks from now?

Heath Slater has been wanting to get in the ring with John Cena for weeks to prove himself. That didn’t happen thanks to Rusev throwing Slater off the stage. Rusev then confronted John Cena and told him like his fellow Americans, he was a quitter and that at Payback he would make Cena utter the words he’s never uttered before, “I Quit.”

Before Rusev spoke, Lana came out to a loud ovation, which didn’t please the Bulgarian brute. Instead, Rusev yelled at Lana and took the microphone away from her, forcing her to the back.

Thanks to Ziggler’s attack on the Celtic Warrior on Tuesday night’s King of the Ring live special on the WWE Network, Sheamus was left bloodied and had to be tended to once he got back to the training room by WWE doctors. He also received multiple stitches.

Both of these man have been furious at each other and have cost each other matches in the last six days. Although Ziggler definitively defeated Sheamus at Extreme Rules, it was Sheamus who got the last word in on that night. Ziggler has evened the score, so it seems.

How Will Ryback Retaliate to Bray Wyatt’s Attack?

Last week on RAW, Ryback defeated Bo Dallas in a quick match. After the match was over, Bray Wyatt showed up in the ring to give us the answer to the question of the superstar he had been talking about in his vignettes for the past month.

Wyatt baited Ryback to attack him and then hit Sister Abigail in the middle of the ring. How will the “Big Guy” respond to the “Eater of Worlds” and “New Face of Fear?”

Barrett’s King of the Ring winning speech was short and sweet, and you can see it exclusively on the WWE Network!

Now that Barrett has officially been named as the 2015 King of the Ring, what is next for the guy with only bad news who now actually has some good news?