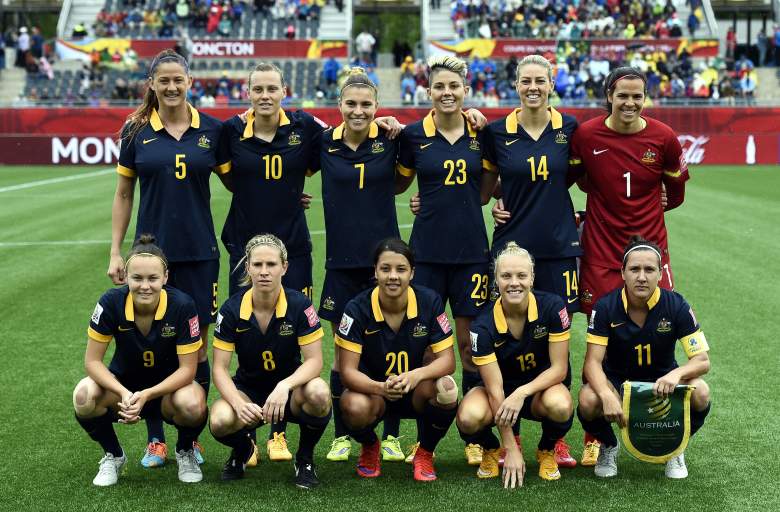 Everyone loves an underdog.

The Australian women’s soccer team became everyone’s favorite underdog earlier this week, defeating Brazil 1-0 in the Round of 16. It was a history-making upset and one of the most emotional victories of the entire World Cup this summer. The group is one of the youngest teams left in the field but there’s something to be said for heart when expectations are somewhat lacking and the Aussies have heart; in spades.

Now, Australia is looking to add another notch to its historic 2015 run when the Matildas square off against reigning World Cup champion Japan on Saturday afternoon.

Here’s what you need to know about the group from down under:

1. The Squad Became the first Australian Team to Advance to the Quarterfinals

It was a shot and a moment that will go down in the Australian history books. Substitute Kyah Simon found the back of the net, tapping in a rebound ball, in the 80th minute to lift Australia to a 1-0 victory over Brazil in the Round of 16 earlier this week.

It was the first time an Australian soccer team – men’s or women’s – had advanced past the first knockout game in World Cup competition.

Kyah Simon & Lisa De Vanna have been menaces this whole tournament. Deserved goal to go up 1-0 on #BRA. 1st goal conceded by Brazilians.

Simon, who had been substituted into the game just 16 minutes before her goal, described the moment:

All that was going through my head was to be there in case (the goalkeeper) fumbled it. It just so happened that the ball fell at my feet and I got the tap-in. 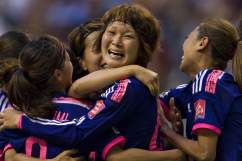 2. Australia is One of the Most Expereinced Teams Still Playing in the World Cup 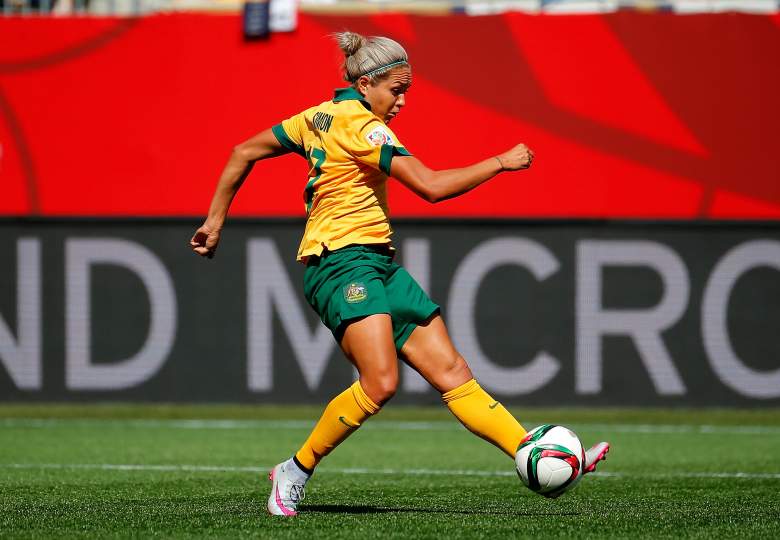 Kyah Simon, who scored the Aussie’s lone goal against Brazil in the Round of 16, is just 24 years old and playing in her second Cup. (Getty)

After escaping the so-called “Group of Death” in pool play, Australia has found its literal footing, brimming with confidence and, perhaps most importantly, youth. The majority of the Matildas are in their mid-20s, with Larissa Crummer registering at the youngest player on the roster at just 19-years-old.

While the Aussies are young, they do not lack for experience. Many of the players on this summer’s were given their first chance years ago, under then-coach Tom Sermanni, at the 2011 World Cup.

Kyah Simon, Sam Kerr, Emily Van Egmond, Tameka Butt, Ellse Kellond-Knight and Servet Uzunlar were on all that team – the same team that lost to Brazil – and are all back in green and gold this year. They’re also the core of Australian women’s soccer. 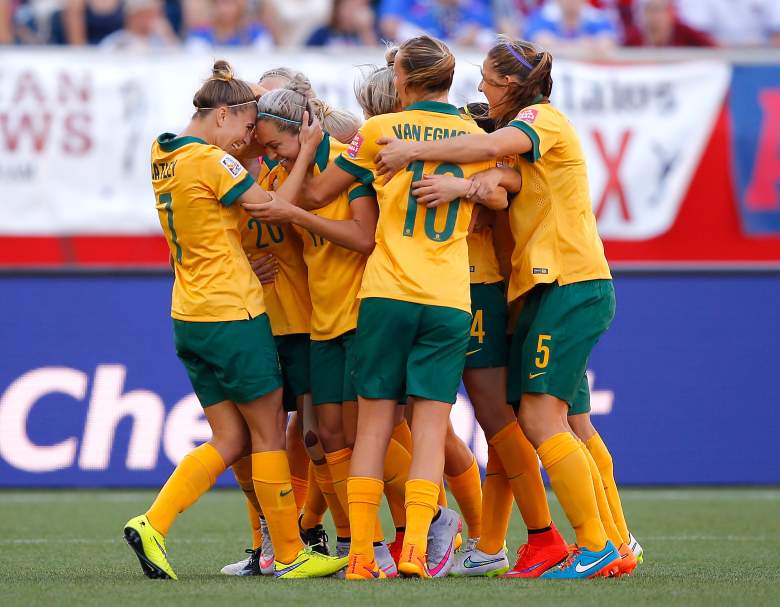 This moment, this semi-final, has been a long time coming for the Aussies in both a metaphorical and literal sense. The Matildas have trained for this summer’s World Cup in a way that no other Australian squad has even considered.

The group attended various training camps, both in Sydney and abroad, and competed in 15 matches before even arriving in Canada for the tournament opener. When Australia faces off against Japan in the quarterfinals, they will have spent 129 days on the road.

That’s not all, according to the Daily Mail, the Aussies have visited six countries in build-up for the Cup, watched an estimated 80 hours of video analysis and shared a whopping 280 meals together. It’s a way of life that has created a bond on this squad that few other teams can match, a closeness that is unparalleled on the current international circuit.

Australian goalkeeper Lydia Williams, playing in her third World Cup, discussed the scheduled with The Guardian:

Most of us have done it for our whole lives, having camp on camp, you know, not having much of a social life [laughs]. But it’s a sacrifice we make to be the best, and to play against the best teams in the world. 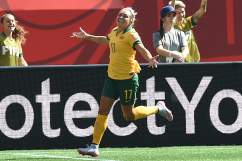 4. The Aussies are Coached by Alen Stajcic 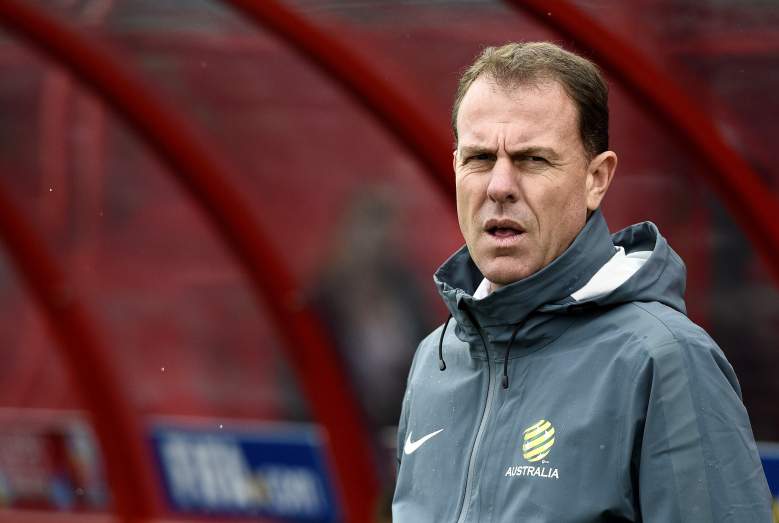 Alan Stajcic tore his ACL when he was 20-years-old and he, immediately, thought his soccer career was over. Not quite. It just altered a little bit.

While Stajcic’s on-filed days were over, his coaching days were just getting started. He started working with the U-18 team in Bankstown and ran the football program at the The Hills Sports High School. Then, a friend gave him the opportunity of a lifetime; to coach the women’s soccer team at the NSW Institute of Sport.

Stajcic rose through the ranks of Australian soccer, including, six years with Sydney FC, and led the team to two premierships, two championships and a third-place finish at the Women’s Club World Cup. He was named named coach of the Westfield Matildas in September 2014 and will be on the sidelines, at least, through the 2016 Olympic Games.

5. Many of the Players Have Day Jobs That Don’t Include Soccer

It isn’t simply about soccer for this team. In fact, it can’t be.

According to a report by the Sydney Morning Herald, many of the players on the Australian women’s team supplement their on-field income with day jobs that, frequently, don’t include soccer. The problem, according to the Herald, is that the Matildas do not draw the kind of viewership numbers that their male counterparts do and, therefore, are paid less by Football Federation Australia.

The women make a base pay of $500 per international match from FFA while the Socceroos make a $6,000 base payment for every international appearance. While the numbers are staggering, FFA women’s football head Emma Highwood said the body was willing to increase pay, particularly after Australia’s performance at the World Cup. She told The Guardian:

No doubt there will be an increase in the structure of those payments. Our long-term goal is the players have a full-time salary so they can concentrate on football. How we get there and when we get there, that’s what we’ve got to work through. We’ll work with the PFA to do that. We grow it when we grow the game, that includes how we grow it commercially and get more eyeballs watching.