The WWE confirmed the passing of the late-great Dusty Rhodes (Real name: Virgil Runnels) on Thursday afternoon. He was 69.

WWE is deeply saddened that Virgil Runnels, aka “The American Dream” Dusty Rhodes, passed away today at age 69. pic.twitter.com/MDfxIAbxwN

Born on October 12th, 1945, and nicknamed “The American Dream,” Rhodes was one of the most transcendent wrestlers and performers of the 1980s. While Hulk Hogan and “Macho Man” Randy Savage tore it up in the WWF, Rhodes had arguably the greatest rivalry in the history of professional wrestling with Ric Flair and had countless, all-time classic matches together. Flair spoke highly of his former rival and best friend outside of the ring:

Statement from "The Nature Boy" Ric Flair on the passing of Dusty Rhodes #RIP #WWE pic.twitter.com/ry0aMG8UiD

Although nothing has been confirmed yet, there are reports that Runnels’ health was starting to slowly deteriorate. He was having kidney problems. TMZ reported that emergency personnel responded to his Orlando home early Thursday morning and Runnels’ passed away once he got to the hospital.

The wrestling world mourns, here is what you need to know about the late Runnels: 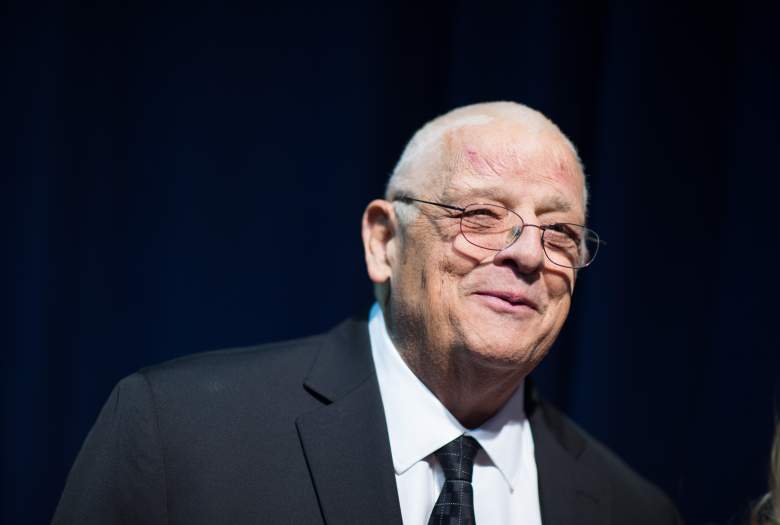 According to his WWE.com Legend’s Profile:

Born the son of a plumber in a poor area of Austin, Texas, Rhodes mixed a blue-collar work ethic with a soul singer’s charisma to become one of the most in-demand stars of the territory days of the 1970s and ’80s. Although he lacked the killer physique of a Hulk Hogan or the technical prowess of a Bob Backlund, “The American Dream” had a magnetism that simply drew audiences to him.

The truth is: Dusty Rhodes was America’s Daniel Bryan before Daniel Bryan. Rhodes represented everything about the normal person; his humble beginnings, his natural charisma and gift of gab and his wrestling style. It wasn’t pretty, highly conventional, but Rhodes’ performances captivated audiences. Although Rhodes began his career as a heel (bad guy) in a tag team with Dick Murdoch, Rhodes quickly grew on the audience, which in turn made him a good guy — the ultimate good guy for the rest of his career.

2. Runnels Had a Behind-the-scenes Presence in the Business for Over 3 Decades 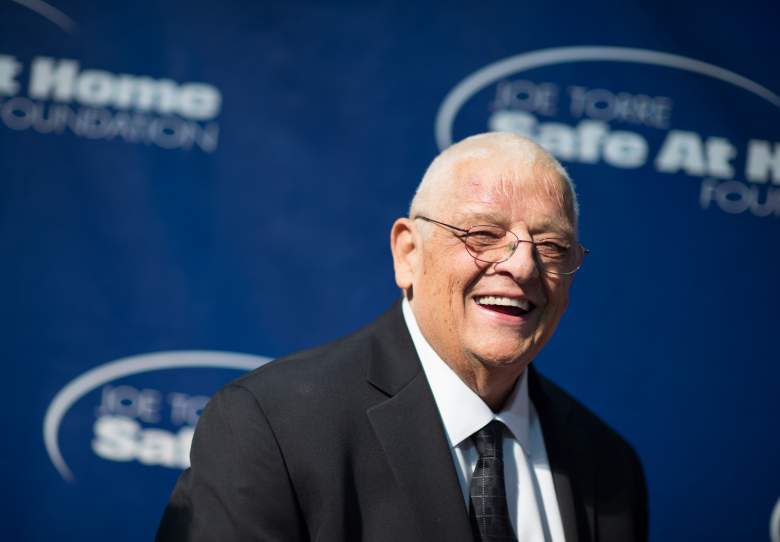 Before Vince McMahon and the World Wrestling Federation expanded their television product and became the No. 1 promotion in North America, there existed the National Wrestling Alliance (NWA) and Jim Crockett Promotions — which later become World Championship Wrestling (WCW) as alternatives.

Not only was Rhodes consistently an active wrestler in the late 1970s and 1980s for each of these promotions, but he was also one of the most innovative minds the professional wrestling business had ever seen. In addition to his on-screen wrestling, Runnels was active in a backstage capacity, primarily in a booking capacity — he would lay out the stories and details of each match, how the matches would end and where the storylines were to go from there. The booking is and what has always made professional wrestling.

Runnels was a booker for Jim Crockett Promotions beginning in 1985. He is credited with many of the concepts that took off in the late 1980s and 1990s (with WCW) such as “War Games” (elimination style tag team match with multiple rings and cages). He was consistently involve in backstage work up until the time of his death, He was one of the primary men involved in backstage work with WWE’s newest promotion, NXT.

3. Runnels’ 2 Sons Have Carried on His Legacy in the Ring

Runnels’ two sons, Dustin and Cody Runnels continue to carry on their father’s legacy in the ring — both are currently employed by the WWE.

Dustin Runnels is better known by his alias of “Goldust.” Known for dressing in Hollywood gold, the Bizarre one is one of the most innovative performers in WWE history. From the time of his debut in the mid-90s, Goldust has become a fan favorite. His segments and promos pushed the envelope of what WWE had previously shown on its television programming. One could say Goldust’s presence and success of his outrageous work helped lead the WWE right into the Attitude Era — its most successful financial period in history.

Cody Runnels has wrestled under the name of Cody Rhodes, but now — like his brother — adopted a “Dust” gimmick and is known as “Stardust.” Cody Rhodes has had much success in his own right being a multiple time Intercontinental Champion.

In 2013, the pair won the WWE Tag Team Championship together by defeating Seth Rollins and Roman Reigns from The Shield. 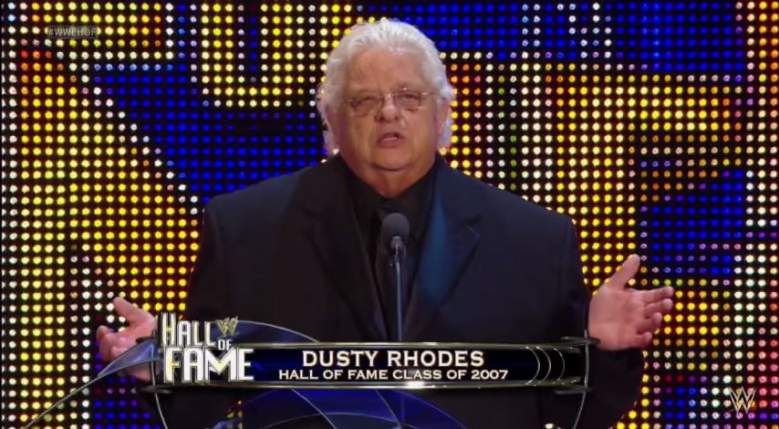 Along with Nick Bockwinkel, Mr. Perfect Curt Hennig, The Wild Samoans, Jerry “The King” Lawler, Jim Ross, The Sheik and Mr. Fuji, Rhodes was elected to the WWE Hall of Fame Class of 2007. As expected, he headlined his class, an honor given to the best of the best.

Rhodes returned to the WWE Hall of Fame five years later when he inducted the group that gave him fits for all of those years, the Four Horsemen.

In Rhodes’ speech, he described that “hard times” (a reference to the promo at the top of this page) was about making peanuts, but given the fans more than what they paid for, and that was always the satisfaction he sought after when he performed in a ring, regardless of what company he performed for.

5. Rhodes’ Work Is Some of the Greatest in the History of Professional Wrestling

Whether it was Harley Race, Ernie Ladd, “Superstar” Billy Graham, Abdullah The Butcher, Terry Funk, The Four Horseman including his greatest rival, Ric Flair, Rhodes’ delivery captivated audiences and turned him from a regional into a national, must-see draw.

Rhodes’ catalog of great matches is longer than most. His greatest hour might have been when he lost to Ric Flair at Starrcade 1985 for the NWA World Heavyweight Championship when Boxing legend Joe Frazier stopped the match due to a cut over Dusty’s eye. A “Dusty finish” is something Rhodes became known for, a false finish to a wrestling match that intended to extend storylines.

Flair vs. Rhodes epitomized a real life feud between the rich man and the common, working man. As it played out on screen, it brought new people to watch their matches.

Rhodes’ promos delivered in ways unimaginable by today’s standards. Many of today’s wrestlers look to Rhodes’ work as inspiration and a style that they could build off of. Rhodes’ most famous promo was his “Hard Times” promo that has been emulated by wrestling fans for years.

Maria Menounos has become a regular in attendance for Wrestlemania weekend. Menounos, a die-hard wrestling fan, is also a historian and one of Rhodes’ biggest fans. She has mimicked the great promo countless times and did it for WWE cameras before this year’s biggest show.

Rhodes’ impact on the wrestling business was one of those rare feats that extended out to the real world too. It is because of the Hulk Hogans, Randy Savages, Ric Flairs, Ultimate Warriors and Dusty Rhodes of the world that the WWE is still the global entity it is today. Rhodes was the perfect personality to blend the portrayal of a pro wrestling character with a real life, behind-the-scenes workhorse.

R.I.P Dusty, you will be missed.