LeBron James backs down Andre Iguodala of the Warriors during his dominant Game 3 showing. (Getty)

With Kyrie Irving and Kevin Love both sidelined, one thing was clear: If the Cavs were going to upset the Warriors in the NBA Finals, LeBron James was going to have to carry Cleveland on his back.

Through three games, James is doing exactly that.

James narrowly missed out on his second straight triple-double in Tuesday night’s 96-91 Game 3 win. But The King was nearly as dominant as he was in Game 2, when he carried the Cavs to a season-evening, 95-93 win.

Playing in his first home NBA Finals game in Cleveland since 2007, James finished 14-for-34 from the field, 2-for-6 from 3, and 10-for-12 from the line. He played all but two minutes, joining teammate Tristan Thompson (44 minutes) and the Warriors’ Steph Curry (also 44) as the only players on either team to play more than 40 minutes.

He’s played at least 46 minutes and scored at least 39 points in all three NBA Finals games, amassing a jaw-dropping 123 points over the first three games.

Here’s a look at James’ key stats broken down by game:

Five years after James’ notorious departure from Cleveland, he has the Cavs within two wins of their first NBA title — and the city of Cleveland’s first title since the Browns won the NFL championship in 1964.

Check out this post for a full Game 3 recap and highlights roundup. 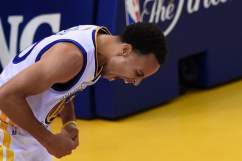