Stephen Curry reacts after being fouled in overtime against the Cleveland Cavaliers during Game Two of the 2015 NBA Finals. (Photo by Ezra Shaw/Getty Images)

Steph Curry’s state of mind was questioned after Game 2 and some were pointing to the contusion he suffered during the playoffs. Curry shot 21.7 percent from the field in Game 2, making only 5 of 23 shots. Fans were in shock when he missed shot after shot to total just 2-of-15 from 3-point range while being covered by Kyrie Irving’s replacement, Matthew Dellavedova. Game 2 was one of the worst-shooting performances demonstrated by Curry since he was drafted in 2006.

In addition, he had 6 turnovers and made just 5 baskets, 6 rebounds and 5 assists for 19 points. Curry was 0-of-3 from his favorite 3-point spot in the left corner to drag down his 93 percent average (13-of-14) in the playoffs. With 13 missed 3-pointers, he wins the award for the most ever missed in a Finals game.

In Game 3, Curry started out at almost a dead stop in the first half with just 3 points in the first quarter and 7 in the second, but came storming back with 17 points in the fourth quarter alone to total 27 points for the game in his 44 minutes. Unfortunately for the Warriors, it was too little to late and they went down 1-2 in the series.

Once down 20, the Warriors are right in it now, and this Steph Curry reverse layup pulled them even closer. WATCH: http://t.co/3xh2Y8HPl4

Curry was relentless as he buried shot after shot in the fourth while the Cavs were unable to keep the ball out of his hands. Curry’s 17 points in the fourth quarter alone and it’s safe to say it wasn’t a coincidence that Golden State closed the gap so quickly at the end. He finished at 10-20 and 7-13 from the 3-point line. 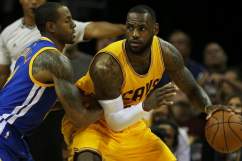