Lebron James and the Cavs may have lost Game 5 of the NBA Finals, but his post-game press conference won Twitter. King James was asked how comfortable he felt given the team was a bit undermanned. “I’m the best player in the world,” Lebron responded as the above video shows. James finished Game 5 with a triple-double, putting up 40 points, 14 rebounds and 11 assists. The Cavaliers will look to push the series to seven games on Tuesday night when they take on the Warriors in Cleveland.

Will being the “best player in the world” be enough to bring the Cavs back? Time will tell. James is certainly missing Kyrie Irving and Kevin Love. Lebron is doing all he can to will the team to victory. For Cleveland to come back in this series, James must receive help from his supporting cast. Role players like Timofey Mozgov and Matthew Dellavedova must bounce back from a poor Game 5 performance if the Cavs have any chance of coming back in the series.

Here is a look at what Twitter had to say about Lebron’s comments:

LeBron: 'I feel confident because I'm the best player in the world' ((mic drop)) pic.twitter.com/81vg44OJ1A

I like when LeBron gets real and says what he's thinking. Best thing about stars getting older is they say what they want. Kobe is same way.

LeBron thought he could get away with saying that because he whispered it ?? pic.twitter.com/EUqZcdK0ba

Am I the only one who's noticed that LeBron is talking mad reckless because he knows he's good regardless of the Finals outcome?

How many people can say they're the best at something, and it's actually true? #LeBron

LeBron should've dropped the mic and walked out right then… https://t.co/0r3rkMna7V

LeBron’s quote during the presser might be the most MJ thing he’s ever said. 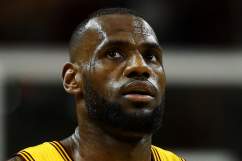