Talk about a little bit of serendipity.

Ellie Harvey was working as a waitress in a small Ohio town when she happened to meet golfer Jason Day. The Australian native was passing through the area while competing and the pair struck up a conversation. Nothing came of the moment though, at least not until years later when Day started texting her again.

It was love from first message. Now, Ellie is a fixture on the PGA Tour with Jason, appearing at all of his competitions and staying by his side during the ups-and-downs of the tournaments, including a bout with vertigo at the U.S. Open earlier this year. Here’s what you need to know about Ellie, who Jason calls his good luck charm:

The couple tied the knot in 2009 and immediately hit the PGA Tour together, albeit in a slightly less-than-usual way. Instead of flying from event to event and staying in top-name hotels, the Day’s traveled in a used RV with their two dogs.

Ellie joined Jason on every course he played in the years immediately following their marriage. While he was making a name for himself on the greens, she was working on an online degree in business with hopes of someday opening her own salon. She described what it was like to be on the tour:

When he was trying to convince me to move in with him and travel, I was a little freaked out. I had my whole life up here. He said, ‘Come to the first event with me and see how it goes.’ The first event was in Hawaii. When I left Ohio my parking lot was iced over. It was awesome, even though he missed the cut. Two weeks later I packed up my stuff and left. From then on it was madness.

The Couple Have One Child & Are Expecting Another

Ellie gave birth to the pair’s first child, a son named Dash, in 2012, prompting Jason to withdraw from the Open Championship that summer. Day was ranked No. 21 in the world at the time and finished as a runner-up at both the Masters and the U.S. Open the year before.

The Day family is set to grow a little bit more after Ellie announced in June, via her Twitter, that she was 19 weeks pregnant. The couple has not announced when they are, officially, expecting their second child or whether the soon-to-be addition is a boy or a girl.

Ellie Grew Up in a Small Ohio Town

The former Ellie Harvey grew up in Lucas, Ohio, a small town near Mansfield of about 600 people total. The entire village is just .69 square miles in size. She graduated from Lucas High School in 2004 with a class that boasted just 35 students.

While Lucas may be on the smaller side of the smallest scale of Ohio towns, it still has a bit of history to it. In 1945, it was the location of Humphrey Bogart and Lauren Bacall’s wedding at the Big House on the grounds of Malabar Farms. The town was also the site of several scenes in The Shawshank Redemption and, in 2014, was the focus of an episode of Ghost Hunters. 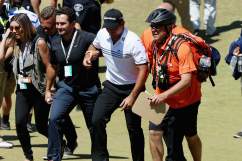 Read More
British Open 2015, Golf
Ellie Harvey and the golf star first met over a decade ago and have been married since 2009. Get to know the Ohio native here.