When Kris Bryant was growing up, he had dreams of playing in the big leagues, of hitting home runs that sailed out of the park. His dad, meanwhile, had dreams of throwing to his son in the Home Run Derby.

Now, both of those dreams are coming true.

Mike Bryant, Kris’ dad, will pitch to his son in the Derby on Monday night. The rookie Chicago Cubs standout is second on the team with 12 home runs and is just the sixth rookie to ever compete in the Home Run Derby. Now, the pair will look for the Derby upset. Kris is seeded No. 8 in the annual event’s brand-new single-elimination bracket format. Here’s what you need to know about Mike:

1. Mike Has Always Wanted to Pitch to His Son in the Derby

This has always been the plan. Even before Kris had officially been named a Home Run Derby participant he had discussed who he’d want to be his pitcher and it has always been just one person; his dad, Mike.

Mike told MLB.com that pitching to his son in the event has always been on his bucket list:

Although Kris is the No. 8 seed, facing off against Albert Pujols in the first-round, Mike still has high expectations. In fact, he’s hoping that the first-place prize is a truck to replace the one he’s been driving since 2007.

2. Mike May Be More Excited to Pitch in the Derby Than Kris is to Hit

Although Mike has been waiting for this moment for years – since Kris picked up a bat, basically – he’s also trying to keep his emotions in check. This is a competition after all and the Bryant’s, both Kris and Mike, want to win.

To my hero and best friend, thanks for always being there for me. Thanks Dad! #HappyFathersDay #R15 @TaylorMadeGolf pic.twitter.com/XdESBJCpxl

The key, of course, is in the pitching. Mike told Kris not to waste his time or energy trying to hit the ball out of the park or rack up hits that land in the 430-foot range. A home run just needs to crest the wall, after all. Mike is also trying to make sure that he doesn’t embarrass his son, although he did add that he’s pretty dead set on getting a photo with Albert Pujols.

3. He Taught Bryant How to Hit – As Well as Joey Gallo 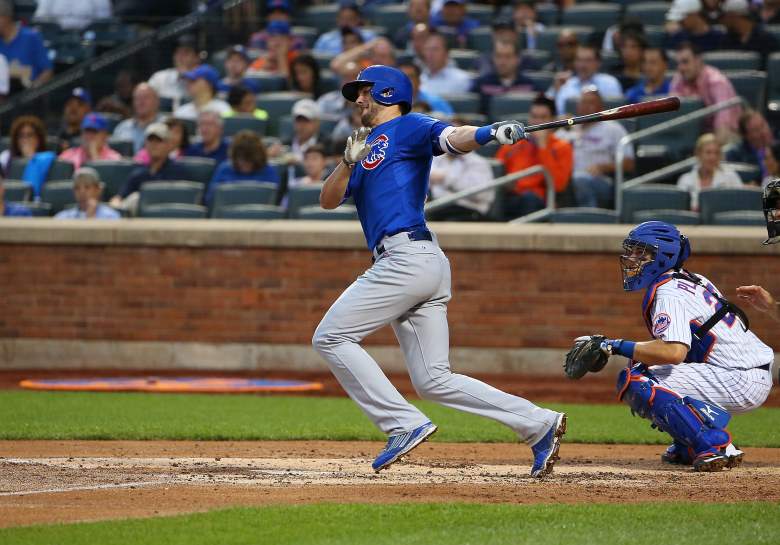 Mike didn’t just help his son, Kris, work on his swing when he was growing up in Las Vegas, he also helped another baseball standout – Texas Rangers prospect Joey Gallo. The instruction began when Kris was just five and Gallo joined after his father, also a former minor league, started coaching a travel team with Mike.

Mike talked with Yahoo Sports about working with the two:

When you’ve got two guys, two baseball families that grew up together, the kids hung out together, and then I see this culminating and they’re on a parallel path to the major leagues, it’s humbling because everyone knows I taught Joey and Kris. Up until this point I was just another instructor for them.

Kris made sure to repay his dad, literally, for the hitting lessons when he was drafted in 2013. The Bryant’s are now the proud owners of, as they call it, a “mancage,” an outdoor batting cage that Kris bought for his dad when he was drafted No. 2 overall.

Mike Bryant may never have made it to the show, but he’s got plenty of on-field experience and even spent several years in the Boston Red Sox system.

Mike, who was born in 1959 in Medford, Massachusetts, was selected by the Red Sox in the ninth round of the 1980 MLB Draft. He played one year in the Class A New York Penn League and a second second season for Winter Haven in the Florida State League. He finished his career with a .204 average in 348 at bats, recording 71 hits and an on base percentage of .284.

Mike, and his wife Sue, are regular attendees at almost all of Kris’ games, a tradition that has gone back to the years he spent playing at the University of San Diego. In fact, the couple has branded themselves “road warriors,” criss-crossing the country to see their son play baseball.

Last year, while Kris was climbing the minor league baseball ladder, his parents followed him from league to league and even drove 10 hours to see his very first professional home run in Boise.

The video is still on Mike’s phone.

h3>Editor’s note: Are you playing daily fantasy yet? Heavy’s partners at DraftKings are paying out $1 billion to daily fantasy players. Sign up with DraftKings promo code HEAVY and get a $600 deposit bonus with no season-long commitment.