Samantha Steele Ponder, 29, is one of the most popular sideline reporters on ESPN college football and basketball broadcasts and as a correspondent on ESPN GameDay. While making a name for herself, Ponder met her soulmate through her career, Christian Ponder who was recently signed by the Oakland Raiders and the former QB for the Florida State Seminoles.

Here’s what you need to know about the talented sideline reporter:

1. She Graduated From Liberty University

Ponder began her college experience at King’s College in Queens, New York, but ended up transferring to Liberty University in Lynchburg, VA.

During her time at King’s College, she met Ben Keeperman, a college football researcher and manager with ABC Sports Radio hostessing at ESPN Zone. Her connection with Keeperman landed her an internship at ABC which turned into a researcher-assistant job for ABC’s college football studio branch.

Thereafter, she transferred to Liberty University after receiving a job offer from Sr. Sports Producer Bruce Carey where she pursued her sports broadcasting career for the school’s television network. She graduated from Liberty University in 2009 and eventually got a job with Fox Sports followed by ESPN.

2. She Used to Be Known As Erin Andrews’ Replacement

Ponder was a successful reporter after graduating from Liberty University, but her real breakout was when she replaced famous sideline reporter, Erin Andrews, for ESPN Gameday. Ponder can also be seen on the sideline reporting for ESPN’s Thursday Night College Football since 2012 next to Jesse Palmer, Rece Davis and David Pollack. 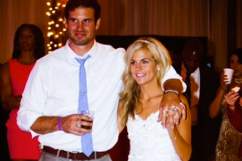 Love these 3! Side note: why does CP look more like my siblings than I do?! ? Happy #nationalsiblingsday @cheeksmagee @barronsteele @jj_steele

Samantha told the Pioneer Press she and Christian started dating at some time in 2012, though she doesn’t remember the exact date. By December of that year, Christian was ready to pop the question.

He picked me up from the airport. I was coming in for just a few hours. He took me back to his house. This was the first week in December. I noticed there were some lights outside. I was like: “Oh, cool. You put Christmas lights outside.” He was like, “You should go look at it.” It was December in Minnesota, and I’m from Phoenix. I’m like: “Dude, I’m not going outside. I don’t want to look at your lights. It’s freezing.” He said, “You should go look.” I said, “No, I’m good.” He’s like, “Seriously, you should go look.” I was arguing with him. I’m like: “No. Don’t tell me what to do. I’ll look at the lights in the morning.” I was being the brat that I am. Then it clicked in my head. So I walked outside, and I look over to the balcony area and he put “Marry Me” in Christmas lights into the ground. He didn’t put a question mark. It was more of a command, like “Marry Me!” I don’t know if I had an option. I turned around, and he was on his knee and asked me. I don’t even remember what he said. It was all kind of a blur. We decided to get married two weeks later.

Rather than throw a lavish ceremony, the two decided to hop in the car and drive to Wisconsin to get married in a civil ceremony without even having told their parents. Samantha said the two had their post-wedding meal at an Arby’s, then attended an “ugly sweater” Christmas party held by a couple of Vikings offensive linemen.

From the Pioneer Press:

I never was really a girl who planned out what my wedding would be, what my dress would look like. Everybody’s different. When we got married, he picked me up at the airport and I was wearing jeans and a sweatshirt and a hat. We drove the 20 minutes to Hudson or whatever it was, walked in, got married. Then we went and ate Arby’s as our wedding meal. We get way more attention than we ever deserve or need or want, because of our jobs. I don’t need a day that’s all about me. I was happy to go get married. That night after we had our Arby’s, we forgot the offensive line had an Ugly Sweater Party at a local restaurant. One of the guys texted Christian and asked, “Dude, where are you at?” We went to the mall and found ugly sweaters and went to the Ugly Sweater Party. We wanted to leave early, but everybody was like, “No, don’t leave.” I’m thinking, “Gosh, we just got married.”

The couple did have a second ceremony and a reception for family and friends. And as Samantha told Entertainment Tonight in an interview you can watch above, she bought the dress for the festivities for $19.

4. Her and Christian’s Daughter Is Named After Ponder’s Florida State Coach

On July 22, 2014 the Ponders welcomed an addition to the family when Samantha gave birth to a baby girl named Bowden Saint Claire Ponder — named after legendary Florida State coach Bobby Bowden, who coached Christian in Tallahassee, and given the same middle name as Samantha.

As ESPN reported in July, Bowden’s parents call her “Scout,” after the young narrator in “To Kill a Mockingbird.”

“It’s crazy to take such a responsibility — you have someone that’s so dependent on you,” Ponder told ESPN’s Ben Goessling. “You’ve got to take care of her and your family. It’s an eye-opening experience, it’s fun and it’s scary at the same time.”

Scout was born less than two months before the start of the college football season, and since Samantha went back to work in time for the first College GameDay show of the year, she decided to take Scout with her on the road.

5. Samantha Ran a 4.2-Mile Race When She Was 7 Months Pregnant

Christian isn’t the only athlete in the Ponder household. Samantha, whose website says she played five sports at Phoenix’s Central High School, ran the Pat Tillman 4.2-mile race during the eighth month of her pregnancy — a feat she talked about in August with TMZ Sports. (Watch the clip above.)

I did it because my husband agreed. He hates running. Most professional athletes, unless they’re in a sport like soccer, hate running. They only run short distances. So he agreed to do it at the very beginning and when it got to a couple weeks before, I thought about backing out, but at that point it was like a competition between the two of us, so I kind of had to.

Samantha told TMZ being pregnant taught her not to take her good health for granted.

It’s definitely motivating in that, it’s like when you get sick, you don’t appreciate being healthy until you get sick. And not that I’m trying to compare pregnancy with sickness. But while I was pregnant I realized that I just didn’t take care of my body the way that I think I should have before, just in terms of eating and working out, ’cause I’d always been pretty healthy. So I think after I had her I just started thinking about “wow, I can run, I can work out.”