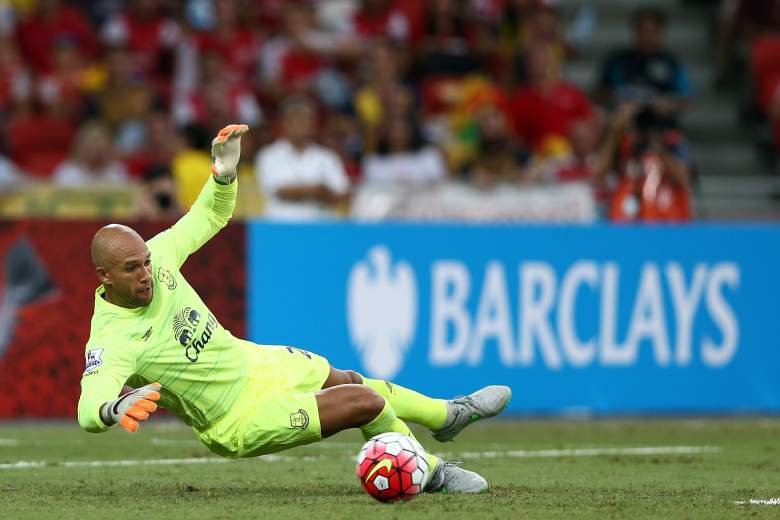 Tim Howard will be in goal for Everton when the EPL season opens August 8. (Getty)

The English Premier League is getting an earlier start than usual this year, but don’t worry, Heavy’s partners at DraftKings have already created a bunch of fantasy soccer contests designed to make you lots of cash.

The EPL season kicks off with 6 matches on Saturday, August 8. All of Saturday’s DraftKings contests begin at 10 a.m. Eastern and do not include players from the Manchester United/Tottenham Hotspur match.

The rules are simple: with a fixed salary cap of $50,000, pick 8 players you think have the chance to score the best. The better they are on the pitch, the more money your fantasy team makes.

— Rosters will consist of 8 players and must include players from at least 3 different teams.
— Roster positions are: GK, D, D, M, M, F, F, Flex (non-goalie)

DraftKings has created a number of contests of varying payouts and buy-in amounts. Some of the more popular contests include:

Chelsea midfielder Eden Hazard is the most expensive player in the player pool at $9,800, $800 more than Everton forward Romelu Lukaku ($9,000), who is listed as questionable. Chelsea forward Diego Costa ($8,900) and teammate midfielder Cesc Fabregas ($7,700) are the third- and fourth-most expensive salaries.

Leighton Baines of Everton has the biggest salary of defenders at $6,500. Branislav Ivanovic ($6,000) is behind Baines.

Editor’s Note: Heavy’s partners at DraftKings are making a splash open the NFL season with the Week 1 Millionaire Maker contest in which the winner takes home $2 million. Sign up with DraftKings and get in on the action today.

Players will accumulate points as follows:

— The MLS awards both primary and secondary assists. Both primary and secondary assists are used for scoring in MLS contests and they have the same point value.
— Offensive stats (goals, assists, shots, shots on goal, crosses) will not be counted for goalkeepers.
— Goalkeepers/Defenders must play at least 60 minutes to qualify for the clean sheet or one goal allowed bonus.
— The player’s team (regardless if he is still playing or not) must allow zero or one goal respectively over the course of regular time and extra time to qualify. Injury time is not counted in a player’s total minutes played.
— Goalkeeper win stat is calculated at the end of regulation time or extra time if needed. Goalkeepers must play at least 60 minutes to qualify for a win.
— Stats from Penalty Kick shootouts will not be counted for any players.
— Own goals do not count as goals for, but do count as goals against for Goalkeepers and do factor into Clean Sheet and One Goal Allowed calculations.