Just another day for the NFL’s most dysfunctional franchise after former Jets linebacker IK Enemkpali broke starting quarterback Geno Smith’s jaw during a locker room brawl. Enemkpali has since been cut by the New York team. According to the Jets, Smith could miss half of the season.

1. Coach Bowles Said Smith Was ‘Sucker-Punched’ With Reports Saying the Fight Was Over $600 That Enemkpali Was Owed

ABC New York, quoting Jets coach Todd Bowles, said Geno Smith was “cold-cocked … sucker-punched, whatever you want to call it.” Immediately following the incident, which occurred on the morning of August 11, Enemkpali was released. Bowles didn’t go into details about exactly what caused the brawl but said it was “childish” and had nothing to do with football. ESPN’s NFL reporter, Adam Schefter, wrote on his Facebook page that the fight was over $600. Schefter said:

At the heart of the dispute between former Jets LB IK Enemkpali and quarterback Geno Smith is $600 that Enemkpali believed Smith owed him, per league sources. Enemkpali purchased a plane ticket for Smith to attend his July 11 football camp at Pfugerville High School in Pfugerville, Texas. However, days before the camp, a person close to Smith was killed in a motorcycle accident in Miami and Smith did not attend Enemkpali’s camp, per sources.

After Smith did not attend, Enemkpali demanded that the Jets’ quarterback refund him the $600 he allegedly used to purchase a plane ticket. Smith told Enemkpali he would reimburse him the money, but he did not. Enkempali confronted Smith today about the money and the confrontation ended in a punch and broken jaw.

This bizarre incident comes after Smith was being booed by Jets fans after some poor displays during pre-season training.

2. Enemkpali Was Getting Ready for a ‘More Pronounced’ Role in 2015

Enemkpali was selected in the sixth round (210 overall) at the 2014 NFL Draft. According to his profile on the Jets website, Enemkpali played in six games in 2014 and managed 3 tackles. Leading up the draft, NFL.com reviewed the player saying:

A strong, tenacious, tightly wound leverage-power rusher most ideally suited for a 3-4 outside linebacker role. Will require patience to develop. Has a high-collision special-teams temperament to contribute in coverage if he can learn to unlock his hips. Best chance will come in Blitzburgh.

Towards the end of the Jets diabolical 2014 season, he was credited as turning “things in the [Jets’] favor” after the team’s narrow late-season win over the Titans. This performance and other promising appearances was apparently going to lead to a “more pronounced” role for Enemkpali in 2015

3. Enemkpali Was Accused of Assaulting a Cop While He Was a College Student

He played his college ball at Louisiana Tech. Enemkpali was All-Conference USA in his senior year, according to his profile on Louisiana Tech’s website. During his time at the school, Enemkpali was accused of assaulting a cop at a steak house in Ruston, Louisiana. The cop, who was off-duty, had been working security for the restaurant. Authorities said a Lincoln Parish deputy happened to be driving by at the time. He too was struck during the the fight. According to media reports at the time, Enemkpali had been pepper sprayed but continued to fight.

He was the first player from the school to join the Jets. As a redshirt senior, Enemkpali won Louisiana Tech’s Willie Roaf Lineman of the Year Award.

4. His Sister Has Just Been Drafted by the Seattle Storm in the WNBA

His sister, Nneka, was a basketball star for the Texas Longhorns. At the 2015 WNBA, she was selected in the third round (26 overall) by the Seattle Storm. After being picked, she told KXAN “I was watching the draft with my family and it was a relief to see name on the selection board after a long year. Ever since high school, it has been a dream of mine to play professionally.” The family are from Austin, Texas, with the kids attending Pflugerville High School, according to his Facebook page.

5. Geno Smith Will Undergo Surgery on His Broken Jaw

Geno Smith will undergo surgery following the season and has been ruled out for as much as 10 weeks. The likelihood is that Ryan Fitzpatrick, he of leg-breaking fame, will start for the Jets. Fitzpatrick is entering his 11th season in the NFL and first with the Jets. He has also played for the St. Louis Rams, Cincinnati Bengals, Buffalo Bills, Tennessee Titans and Houston Texans. The Harvard grad has thrown 123 touchdowns compared to 101 interceptions and last season played with the Texans. The Jets traded for Fitzpatrick in March 2015. 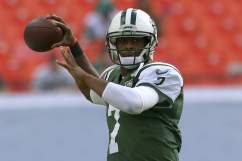