The Kansas City Chiefs defeated the Seattle Seahawks 14-13 at Arrowhead Stadium in the second preseason game for each team. The Chiefs first team offense played the entire first half with mixed results. The big story was Jeremy Maclin’s first touchdown as a member of the Kansas City Chiefs. Maclin was targeted often and finished the night with 3 receptions for 22 yards.

Alex Smith looked good in spurts but made a critical error on an interception throw that Seahawks linebacker Bobby Wagner returned for a touchdown. Smith finished the night 11 of 18 on pass attempts for 81 yards. He threw one touchdown and one interception.

Chiefs backup quarterback Chase Daniel had his second straight impressive preseason game. Daniel stepped onto the field at the start of the second half and led the team to what turned out to be the game winning touchdown drive. Daniel was 8 of 12 for 82 yards and 1 touchdown.

Seahawks quarterback Russell Wilson finished 9 of 15 for 78 yards. The Seahawks offensive line continued to look poor, but did play slightly better than their first outing. It is still a cause of concern with the season just weeks away. It will be interesting to see if the Seahawks go out and sign another offensive lineman.

Here are the key moments, highlights, stats and analysis of the preseason game between the Seahawks and Chiefs:

Eric Berry making his way onto the field at Arrowhead for the first time this season. #Chiefs pic.twitter.com/v9KeaCnAsX

Nine months ago, Eric Berry was diagnosed with cancer. While Berry played last week in his first game since the diagnosis, the second preseason game marked his return to Kansas City. Berry’s story continues to be one of the more inspirational narratives heading into the NFL season.

Both Offenses Started Off Slow

The only team that can stop Jamaal Charles is the Chiefs. pic.twitter.com/EvZxIdcC0M

It was halfway through the first quarter and the offenses had combined for 12 total yards. Both teams were looking to start building some semblance of offensive rhythm early on in the preseason. Especially, with the new additions to their respective rosters.

Jeremy Maclin Scored His First Touchdown as a Chiefs Player

Alex Smith targeted Jeremy Maclin often including this 3-yard touchdown. This marks Maclin’s first touchdown as a member of the Kansas City Chiefs. Earlier in the game, Maclin survived a brief scare.

He received a pitch in the backfield late in the first quarter. Maclin gained a few yards but came up wobbly after the Seahawks Bruce Irvin delivered a big hit. The injury did not appear to be serious as he returned to the field shortly after the hit. 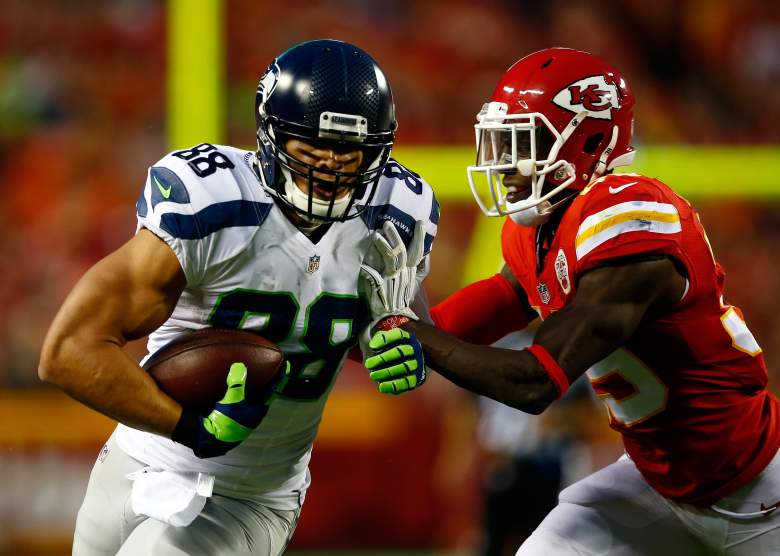 Jimmy Graham was targeted often as the Seahawks made a late 2nd quarter drive. Graham had 3 receptions for 39 yards including a 21 yard play. The drive led to a field goal for Seattle. Graham was one of the lone bright spots for the Seahawks offense as the offensive line continued to struggle.

Linebacker Bobby Wagner Scored on a Pick-6 for the Seahawks

Alex Smith did not see Seahawks linebacker Bobby Wagner. As receiver Jason Avant went to sit down on his route, Wagner broke on the ball and ran it back for a Seahawks touchdown. Plays like this are just a small reason the Seahawks re-signed Wagner to a long-term deal this offseason.

Dee Ford Took a Hard Chip-Block to the Chest

Chiefs defensive end Dee Ford took a hard block from Seahawks running back Christine Michael. Ford went to blow by left tackle Russell Okung but did not see Michael coming towards him. Michael blocked him directly in the chest and Ford immediately went down. He did not return for the remainder of the game.

The Seahawks Led the Chiefs 10-7 at Halftime

Alex Smith attempted a Hail Mary at midfield but it was incomplete as time expired in the first half. Smith was 11 of 18 in the half for 81 yards with 1 touchdown and 1 interception. Russell Wilson was 9 of 15 for 78 yards.

Chase Daniel started the second half at quarterback for the Chiefs. Daniel went 5 of 6 for 61 yards and led a touchdown drive on his very first series against the Seahawks. Daniel also impressed in the first preseason game by throwing 3 touchdown passes. He finished the game 8 of 12 for 82 yards and a touchdown. If Alex Smith continues to underwhelm, will the Chiefs look into launching a legitimate quarterback competition?

The Seahawks Offense Sputtered in the Redzone

Good drive from second-team offense until they got in goal-to-go situation. 14-13 Chiefs.

Reserve quarterback R.J. Archer led an impressive third quarter drive for the Seahawks until they hit the redzone. The Chiefs defense clamped down and held Seattle to a field goal. Archer did connect with rookie Tyler Lockett for a nice reception before the team was stopped at the goal-line on multiple plays. This would be as close as the Seahawks got to the endzone for the second half. 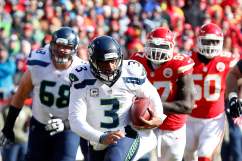