Antonio Tarver and Steve Cunningham fight to a draw after 12 rounds of heavyweight boxing. (Getty)

Antonio Tarver and Steve Cunningham fought to a split draw on Saturday at the Prudential Center in Newark, New Jersey.

In a somewhat sober affair, the judges had to decide between the high output of Cunningham and the more telling punches of Tarver. No consensus was found– after 12 rounds of heavyweight boxing, the scorecards read 115-113 for Cunningham; 115-114 for Tarver; and 114-114.

“I knew they weren’t educated on my defense and ring generalship,” Tarver said after the fight. “I threw the harder punches and wasn’t tired. I controlled the tempo, kept my jab busy and feel like I outboxed him too.”

Tarver landed 141 of the 450 punches he threw, Cunningham landed 154 of 678. Check out some action from the final round:

Former light heavyweight world champion Antonio Tarver (31-6-1, 22 KOs) came into Saturday’s fight riding off of a knockout victory over Johnathon Banks in December of last year and a four-fight undefeated streak after his back-to-back losses to Chad Dawson back in 2008 and 2009. A 1996 Olympian and the  first fighter to kayo Roy Jones Jr., Tarver, a 46-year-old veteran, also holds wins over Montell Griffin and Reggie Johnson.

Steve Cunningham (28-7-1, 13 KOs), a former IBF World cruiserweight champion, had last been in action with a disappointing loss to undefeated Ukrainian Vyacheslav Glazkov in a fight in which many observers thought the Philadelphia native had done enough to walk away with the victory. Prior to the Glazkov encounter, Cunningham, 39 years old, had handed out first-time defeats to both Natu Visinia and Amir Mansour.

“I’m the man I’ve always been before and after the fight, and this decision, you won’t find me kicking and screaming,” Cunningham said. “I have nothing to be ashamed of and I’ll get together with my team and family and talk about what we do next.” 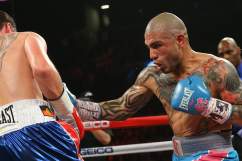 Saturday’s bout opened with a slightly more active Cunningham pushing the action on a meandering Tarver in an initial feeling-out round.

The action picked up ever-so-slightly in the second and third installments as Cunningham established his punches and showed off some dancing moves along the perimeter of the ring, but the pace still felt cautious and measured.

The boys came out punching in fourth round, and looked like they were finally ready to fight. But the pace settled back down into the medium tempo that the fighters had established early on. A punch to the head from Tarver in the last minute of the round left Cunningham wobbly-legged, but he was fully recovered by the end of the frame.

Good action in the fifth round, with exchanges in the middle of the ring and both fighters taking turns hurting each other. Sharp-shooting Cunningham worked the jab for the first half of the sixth round, opening up Tarver for combinations and body shots before the older veteran pressured Steve to the defense and on to the bicycle.

Tarver continued controlling the action into the seventh, dictating the distance and keeping Cunningham on the move for most for the round.

Tarver scored well against the ropes in the ninth round, but the wear of the fight was showing on his face as he puffed with an open mouth.

Cunningham may have felt Tarver was ripe for the picking, the way he came out in the 10th and pummeled the 46-year-old into the corner. But Tarver survived the early onslaught and went on to land a straight left that momentarily threatened to put the former military man in peril.

The fighters came out refreshed into the final two rounds, with the fight still up for grabs. Cunningham kept busy, Tarver worked the openings, and the corners pleaded; but the fight concluded with the same muted action that persisted throughout the contest.

“He didn’t hurt me and couldn’t get to my body,” Tarver said. “I did what I had to do but didn’t get the win. We got a draw and I’m not satisfied with it at all.”