Early in the second half of Chelsea’s match with Swansea City at Stamford Bridge, Blues goalie Thibaut Courtois received a straight red for this foul on Swansea’s Gomis. He stuck out his leg to deny a clear goal-scoring opportunity according to the referee, resulting in the red.

Gomis converted the ensuing penalty past new reserve goalie Asmir Begovic, leveling the match at 2-2. Andre Ayew marked his debut for Swansea with a goal in the first half.

Courtois was a game-time decision for the match after injuring his knee during warmups. It’s just the second red card of his career; he was sent off while playing for Atletico Madrid in 2011/2012.

Begovic was a $12 million purchase from Stoke City over the summer after the departure of Petr Cech to rivals Arsenal. 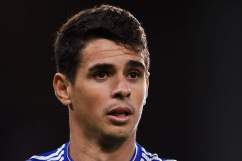 Read More
Soccer
Chelsea goalie Thibaut Courtois saw red in the first match of the season for a foul in the box on Swansea's Gomis.