After a summer being hyped up, Texans fans were let down.

Brian Hoyer threw an interception on his very first attempt, and Travis Kelce scored twice in the first quarter as the Chiefs beat the Texans, 27-20. The score is much close than the game actually was, thanks to a late rally from Ryan Mallett after Hoyer was benched.

The Chiefs had a perfect gameplan for the Houston defense. Knowing Watt and Co. like to rush aggressively, Alex Smith dumped off to Jamaal Charles early and often. The Texans defense was scrambled, and Smith picked them apart with three first-half touchdowns. KC controlled the ball late, using the clock and minimizing mistakes on their way to victory.

Bill O’Brien named Hoyer his starter early to avoid any controversy. Now, just one game into the season, that’s exactly what he’s got. Mallett was dealing on his only two drives, finishing 8/13 with 98 yards and a TD. O’Brien has a decision to make before he takes his team to Carolina for a Week Two game against the Panthers. 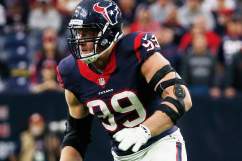 How to Watch Chiefs vs. Texans Live Stream Online 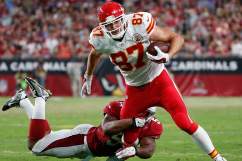 Mallett replaces Hoyer and taking offense down the field.

After a 4th quarter drive was ended with an intentional grounding penalty, O’Brien had seen enough of Brian Hoyer.

When Hoyer was good, he was fine. He showed nice touch on the touchdown to Hopkins, and spread the ball around. But Hoyer’s bad was ugly. Missed blitz pickups, fumbling the ball, and erratic passing dug the Texans in a deep hole they never recovered from.

Was Hoyer’s confidence shot after the first-play INT? It couldn’t have helped. But for the final minutes of this game, it’s Ryan Mallett’s offense.

Mallett immediately drove the Texans down the field, hitting Hopkins multiple times. He eventually found DeAndre twice in the endzone, first for the score and then for the 2-point conversion.

And Ryan Mallett comes in and throws a touchdown pass to DeAndre Hopkins on his first drive. Then a 2-point conversion to Hopkins. #Texans

Hoyer the first out on the field to congratulate Mallett. #Texans

That had to feel good. Derrick Johnson’s been waiting a year for that folks.

If not for Eric Berry, Derrick Johnson would be the feel-good comeback story for the Chiefs. The team’s top linebacker missed all of 2014 after tearing his Achilles in last year’s opener. Today, Johnson looked healthy as ever, helping to apply relentless pressure on the helpless Brian Hoyer.

Maclin Had a Big Catch Overturned in the 3rd

After the Texans opened the second half with a three-and-out, the Chiefs looked poised to once again drive down the field on Houston. The drive stalled, however, after a long completion to new Chief Jeremy Maclin was overturned.

What looked like a possible backbreaker for the Texans instead gave them new life, and they forced a punt on the next play.

Travis Kelce was dominant in the first half, hauling in two touchdowns (Getty).

For Texans fans, it was an absolute nightmare first half to open the season. Other than a few nice plays from J.J. Watt, the Texans did as much damage to themselves as they did to the Chiefs.

Texans look like a team playing its first preseason game.

Meanwhile, the Chiefs offense looked unstoppable through two quarters. KC used a short passing game, and dumped the ball off whenever the Texans tried to rush upfield and blitz. Jamaal Charles had five catches in the first half, including one that resulted in the team’s third touchdown.

Hoyer Turned it Over Again in the Second

It’s one thing to turn the ball over as a quarterback. It’s another to make mistakes deep in your own territory. Hoyer hurt his own team again in the 2nd, fumbling the ball to KC at his own 18. Hoyer held onto the ball too long, and All-Pro rusher Justin Houston recorder the sack/strip. KC didn’t waste time, and kept pounding Houston with short passes. Smith hit Jamaal Charles for his fifth reception of the game, and Charles took it to the house to blow the game open for KC.

Hopkins Got Houston Back in the Game

Quickly down two scores and needing a response, the Texans battled back down the field. They got big chunks of yardage from Cecil Shorts and John Grimes, and in no time were knocking on the door. The Texans struggled at the goal line in preseason, and were stuffed on the ground initially. They got in through the air, on a leaping grap from DeAndre Hopkins in the corner of the end zone.

After the score, the Texans were let down again when Randy Bullock missed the 33-yard extra point attempt.

The Texans had the Chiefs next drive down to a 3rd and 13, but a screen to Jamaal Charles prolonged the drive. Smith hit Charles a few more times, moving the ball into Texans territory. Then Smith found Kelce downfield crossing right to left, and he took it all the way for the Chiefs’ second score.

Brian Hoyer Was Intercepted on His First Pass

The Texans defense held KC on their opening drive, but were done no favors by the offense. Brian Hoyer was intercepted on his first pass as a Texan, giving the Chiefs the ball at the 13 yard line. Alex Smith took advantage, and found Travis Kelce in the back of the end zone for the opening TD.

Both teams are looking to regain defenders that didn’t finish the 2014 season. Both injuries are different, but both players can have a huge impact on today’s game.

The Texans are looking to welcome back former number one overall pick Jadaveon Clowney. Clowney underwent two knee surgeries in 2014, but has completed rehab and should be ready to go today. He apparently will be on a snap count, but he should have plenty of opportunity up front alongside Watt and Wilfork.

For the Chiefs, the return of safety Eric Berry means much more than successful rehab. Berry is recovering from chemotherapy, after being diagnosed with Hodgkin’s lymphoma in the middle of last season. Berry persisted through offseason workouts despite the strain on his body, and has been an inspiration to his team. To get into full Hype Mode about Berry’s return before kickoff, look no further than this video: