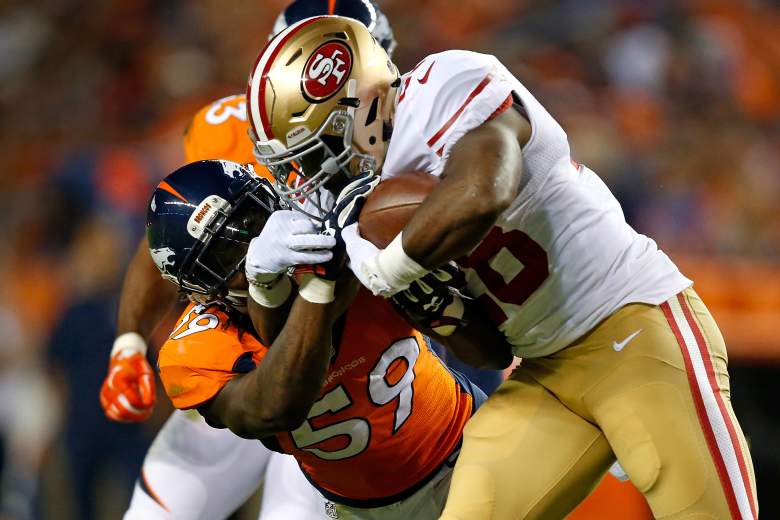 San Francisco running back Carlos Hyde is ready to get the bulk of the team’s carries.(Getty)

A major key to winning money on DraftKings is finding value in your lineup choices.

Nobody wants to overpay for a player who doesn’t perform. You want the best bang for your buck. You want the cheapest players with the biggest upside. And big names are not always the best choices.

This particular post will focus on the running backs who have affordable salaries and a chance to score a lot of points for your fantasy team in Week 1.

In your DraftKings lineup, you must play at least 2 running backs, but you have the option of using a third in the FLEX position (you can also use a wide receiver or tight end there).

So who are the best choices for Week 1 of the NFL season? Which, by the way, will be here in days. Thursday, September 10, to be exact. Although that Patriots-Steelers game won’t be featured in DraftKings’ most popular contests. They will only include players with games on Sunday and Monday (September 13 and 14).

The most expensive running back in Week 1 is the Chiefs’ Jamaal Charles at $7,900. But we’re bargain shopping, looking for the best deals under $6K. And there are a handful of them available for the opening weekend.

A strong start in Week 1 not only fattens your bankroll, but also gives you confidence heading into Week 2.

As for the fantasy games offered in Week 1, the biggest is the NFL Millionaire Maker contest, which is handing out a record-setting $10 million in prize money. The entry fee is $20 and the contest pays $2 million to the top finisher.

Here are some of the top bargains for the Week 1 running backs:

Jonathan Stewart, Panthers: at Jaguars, $5,800 — Stewart no longer has to compete with DeAngelo Williams for carries (Steelers now) and the Jags aren’t known to be the stingiest defense. DraftKings awards 1 point per reception, and while Stewart isn’t much of a pass-catcher, he could do some damage with 20 carries. I’m probably not using him in any contests, but that price is attractive.

Latavius Murray, Raiders: vs. Bengals, $5,700 — Everybody is high on Murray this year, despite his penchant for getting injured. Believe it or not, the Raiders’ O-Line should be pretty good and the Bengals don’t exactly have the most intimidating front 7. And Murray is a good bet to add 3 or 4 extra points in the passing game.

Carlos Hyde, 49ers: vs. Vikings, $5,300 — Hyde is expected to get the bulk of the carries, though he’ll likely be replaced by Reggie Bush on passing downs (and maybe a few carries to Jarryd Hayne). But with a 20-touch game (including goal line totes) vs. a so-so Vikings front 7 could yield a very productive opening day for Hyde. I’m certainly on board with Hyde for a few contests in Week 1.

Doug Martin, Buccaneers: vs. Titans, $4,500 — After a forgettable past 2 seasons, Martin looked rejuvenated in the preseason. Does that much? Probably not. Though as the starter with that price tag and going against the extremely accommodating Titans? Yeah, that works.

Chris Ivory, Jets: vs. Browns, $4,100 — Ivory should be a fantasy stud in Week 1 with 20+ touches, which I absolutely see happening. He’s going to get goal line carries and be used more in the passing game, too. Ivory is definitely a bargain vs. the Browns.