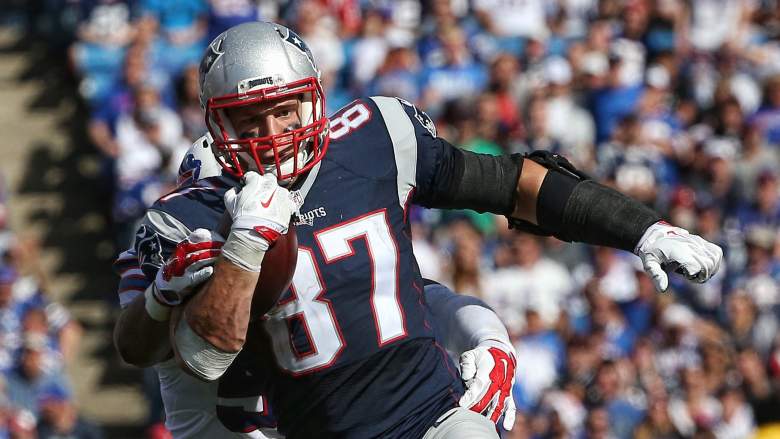 We are at the 11th hour of the NFL’s fantasy football week. OK, maybe like 10th hour. Doesn’t matter, it’ll be here before you know it.

Setting your DraftKings fantasy lineups is ridiculously stressful. So much studying, so many options, so many roster combinations. Then, of course, so much second-guessing yourself. We all know that feeling.

Well, I’m here to make things a bit easier for you. I think. I hope.

I’ve done the studying and the research and all that. And I’ve identified a bunch of players I will certainly be rolling with when the DraftKings contests kick off Sunday.

For the 3rd consecutive week DraftKings will be hosting the Millionaire Maker and the Play Action contests.

Click here to sign up for the $7M Millionaire Maker contest and here for the $1M Play Action.

Now, below I’ve been toying around with a few lineups as I do every week. They aren’t set in stone yet, but they’re pretty close. I have made 3 lineups, though I’m sure they can mixed and matched. Either way, they’re all filled with players who have potential to score big points.

Lineup 1: This is heavy on the Patriots passing game. It is the best in the league, so you probably want to use them.

Lineup 2: This is probably the most balanced lineup. Very productive players at reasonable prices.

Lineup 3: This lineup has a few fliers and probably won’t be making the cut for the Millionaire Maker, but I’ll likely give it a whirl in the lower buy-in Play Action contest.

And remember to bookmark our fantasy football rankings 2015 page as we’ll be doing weekly rankings and offering weekly advice posts for your season-long leagues. Keep up-to-date on who to start and who to sit every weekend.

Let’s take a look at some potential Week 3 DraftKings lineups: 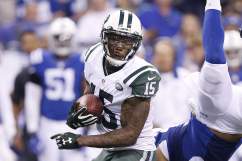 QB Tom Brady, Patriots: at Jaguars, $7,700 — Hands down best in the league right now and the onslaught is just beginning methinks.

RB Devonta Freeman: at Falcons, $4,600 — With Tevin Coleman out, Freeman is the lead back and will dominant the touches.

RB Danny Woodhead, Chargers: at Vikings, $4,400 — Woodhead works because he’ll get you 40 yards rushing, but also 5 or so receptions and maybe a TD. DraftKings awards a point per reception. It adds up vs. a shaky Vikings D.

WR Julian Edelman, Patriots: at Jaguars, $7,000 — Edelman has gone back-to-back 11 catches for 97 yards. He scores big in DraftKings because of the PPR format.

WR Brandon Marshall, Jets: vs. Eagles, $6,200 — QB Ryan Fitzpatrick looks Marshall’s way often and will continue to do so vs. the Eagles, who have been torched by No. 1 WRs.

WR Allen Robinson, Jaguars: vs. Patriots, $5,200 — Robinson had a huge Week 2 and should pick up where he left off as the Jags look to play catch-up with the Pats. Garbage points count in fantasy football.

TE Rob Gronkowski, Patriots: at Jaguars, $7,400 — Gronk is actually a bargain at $7,400. He’s as close to a lock as you can get. He can’t be covered. I’m not worried starting both Gronk and Edelman — they’ll both get theirs.

FLEX Doug Baldwin, Seahawks: vs. Bears, $4,000 — Baldwin has caught 7 balls in each of the first 2 games, a sign he’s getting a lot of targets. Expect more of the same vs. the Bears, who have been dreadful against the pass.

DST Seattle Seahawks: vs. Bears, $3,400 — Lots of reasons here: Jimmy Clausen is starting at QB, WR Alshon Jeffery might miss the game, Kam Chancellor is back at safety for Seattle, the Seahawks are 0-2 and it’s their first home game. Yup, it could get ugly.

Sign up with DraftKings here and enter DraftKings promo code HEAVY, and DraftKings will give you a best-in-the-industry 100 percent deposit match up to $600 that you can put to use during football season. 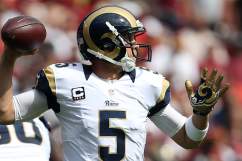 QB Carson Palmer, Cardinals: vs. 49ers, $6,600 — A bargain price for Palmer, who is healthy and playing out of his mind. Niners just gave up 369 yards and 3 TDs to Ben Roethlisberger.

RB Le’Veon Bell, Steelers: at Rams, $7,500 — Bell’s first game back from suspension should see him get a ton of touches against a Rams defense which has been run over by opposing running backs.

RB Dion Lewis, Patriots: at Jaguars, $4,200 — Value pick here. Lewis might not get a ton of carries, but he makes up for it in the passing game. He’s very much like Danny Woodhead above.

WR Emmanuel Sanders, Broncos: at Lions, $7,600 — Sanders seems to get double-digit targets each week and makes the most of them. I actually prefer him over teammate Demaryius Thomas ($8,000).

WR Randall Cobb, Packers: vs. Chiefs, $7,300 — Aaron Rodgers’ No. 1 target should shred the Chiefs, who allow the most points to opposing receivers in DraftKings.

FLEX Michael Crabtree, Raiders: at Browns, $4,600 — Crabtree is 5th in the league in targets and will see a bunch again Sunday. The Browns can play some D, but the opportunities will be there. 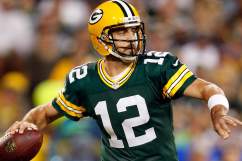 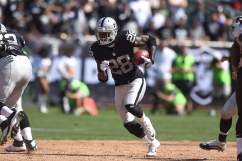 QB Nick Foles, Rams: vs. Steelers, $5,800 — Right off the bat, we have a wildcard. Foles is solid, inexpensive and facing a very generous Steelers pass defense. He’s a flier who could pay off.

RB Bilal Powell, Jets: vs. Eagles, $3,000 — Say what? There is growing concern about starter Chris Ivory (quad), who missed practice Thursday. Even with Ivory, Powell has been getting 15 touches per game. Without Ivory, that number goes up against a vulnerable Eagles D.

RB Jamaal Charles, Chiefs: at Packers, $7,400 — Charles is guaranteed 20 touches between carries and receptions vs. the Packers, who have had no problem giving up fantasy points to opposing running backs.

WR Antonio Brown, Steelers: at Rams, $8,900 — The Rams can play pass defense, but Brown is in his own world. A world the Rams’ secondary doesn’t know.

WR AJ Green, Bengals: at Ravens, $7,200 — Green has been somewhat of a disappointment, but he has scored in 3 straight games vs. the Ravens, who have been shaky-at-best in the pass D department. That breakout game is on the horizon.

WR Jarvis Landry, Dolphins: vs. Bills, $6,400 — Landry is a PPR machine who will get many opportunities against a torchable Bills secondary. Landry is also a threat on special teams as a punt returner.

TE Jared Cook, Rams: vs. Steelers, $2,800 — Foles’ top target is Cook, who at $2,800 is a total bargain. The Steelers were dominated by Gronk in Week 1, then allowed Vernon Davis of the 49ers to have his best game in seemingly forever.

FLEX Latavius Murray, Raiders: at Browns, $5,800 — Cleveland is definitely beatable in the ground game and Murray is thisclose to having that breakout game. He also plays a factor in the passing game, which is rewarded in DraftKings.

DST Denver Broncos: at Lions, $3,000 — The Broncos have played lockdown pass defense, allowing no touchdowns and 134 yards per game. They’ve also forced 7 turnovers, 2nd-best in the league. Lions QB Matthew Stafford is no stranger to turnovers.

Read More
DraftKings, Fantasy Football, Football, NFL
Week 3 of the NFL season is underway, so that means it's time to set your DraftKings lineups. Keep reading to get advice for your fantasy football rosters.