The spotlight isn’t too bright for Josh Rosen. That’s good news since it’s a lot to get a whole heck of a lot brighter.

Rosen, a true freshman, is set to begin his college career as the UCLA starting quarterback when the Bruins square off against the University of Virginia in their season opener on September 5. The California native was the top-ranked quarterback recruit out of high school last year and after a quasi-quarterback battle during the preseason, earned the rights to direct the Bruins offense this fall.

He’s already impressed plenty of people, including some of his opponents at UVA, and now Rosen is focused on simply helping his team win. Here’s what you need to know about the brand-new college quarterback: 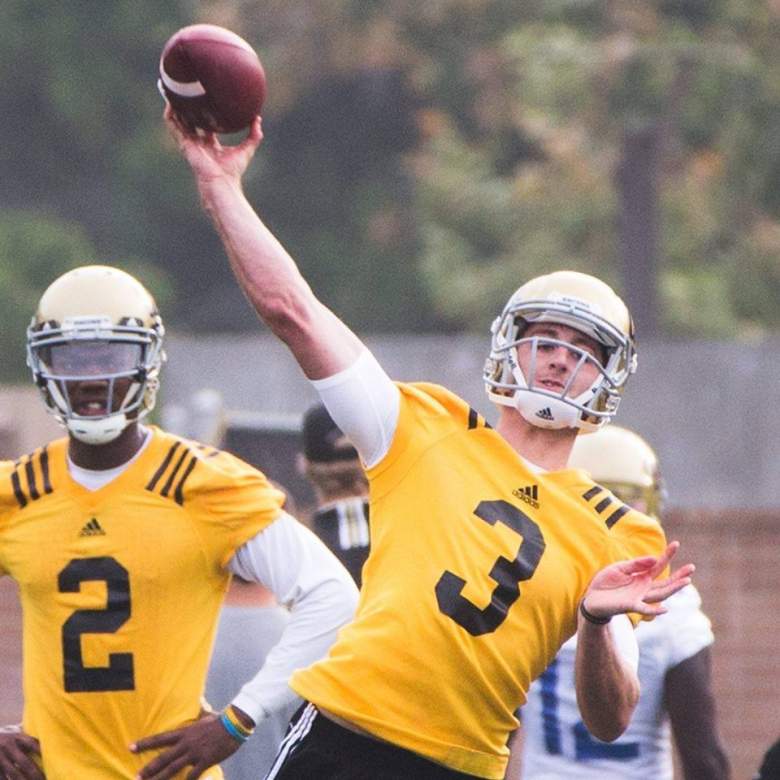 Rosen enrolled at UCLA in January 2015 so that he wouldn’t miss any spring practices with the football team. (Facebook)

At the end, it came down to Josh and Jerry. When you have done it as long as we have done it, at some point it just becomes apparent to you. You get a gut feeling. You have seen enough and you say, `You know what? It’s time to make that decision, and let’s go.’ And that’s what we did.

While the decision to go with an 18-year old, true freshman as UCLA’s starter may have surprised some, analysts have suggested that there wasn’t really much a quarterback battle to begin with. Rosen is already a top-tier quarterback and Neuheisel was more there to simply show him the college way. Rosen grasped the playbook quickly enough, reportedly in just three days, and was consistent enough during practice, he would earn the starting job; without question.

2. He Attended St. John Bosco & Was the Top QB Recruit in His Class

Rosen played high school football at St. John Bosco in Bellflower, California where he was nothing short of a standout at quarterback. Throughout the course of his career he passed for a whopping 90 touchdowns and 11,175 yards. During his senior season, Rosen was named the Los Angeles Times Player of the Year and the Long Beach Press-Telegram Dream Player of the Year after racking up 3,186 yards, 29 touchdowns and just four interceptions.

He never lost a Trinity League game in 15 starts.

Rosen had verbally committed to UCLA in March 2014, as a junior, and signed his National Letter of Intent in September. He graduated high school early and began tacking classes at UCLA in January 2015. Coming out of high school Rosen was rated as a five-star recruit by both Rivals and Scout and was ranked as the No. 1 quarterback in his class.

3. Some Have Criticized Rosen For Being Too Confident

Had an awesome visit to UCLA. @UCLACoachMora is the man. Changing all the *mannequins* to #3 pic.twitter.com/HnKohK8MRs

If there is one downside to Rosen, and there aren’t many when he’s on the football field, it’s that he might actually be too confident. While attending the Nike Elite 11 camp in Oregon the summer before his senior season, Rosen reportedly butted heads with former NFL quarterback Trent Dilfer who runs the event. Dilfer commented on Rosen’s attitude on ESPN, saying:

He’s super, super smart, but I think it is almost a curse for him. Josh is a guy who has yet to buy into what I am preaching. I like being challenged. I don’t mind that stuff. My bigger thing was he thinks he knows more than he knows.

Multiple accounts suggested that it was Rosen’s attitude and over-confidence that cost him a scholarship at Stanford, the school he had always dreamt of attending. Sources claimed that Rosen was “perceived to be overbearing.”

Rosen’s confidence is not limited to the football field either. He notched a 4.0 GPA in high school and named AP physics as his favorite class. He considered majoring in astrophysics before settling on economics with a minor in cognitive studies. Rosen is smart. He knows it. He’s also not afraid to let others know it. Now, as his college career is about to take off, it’s simply a matter of controlling that ego.

Julie Cousins, Kirk’s Wife: The Pictures You Need to See

4. UCLA Coach Jim Mora Blasted Rosen in the Press During the Preseason

Talk about a turn-around.

During a mid-August practice, UCLA coach Jim Mora made sure to point out Rosen’s shortcomings as a quarterback after a particularly bad performance. The Bruins coach turned to reporters standing on the sideline and shouted “Tell your readers that is why he has not been named the starter.”

It got even worse. Mora’s jabs included: “You can’t hit an open receiver down field with no defense.” and “Go back to Bosco and beat some more [bad] teams.”

Somewhere between insults and the season opener, Mora’s tuned changed drastically and he named the true freshman as the Bruins’ starting quarterback for, at least, week one.

5. Rosen’s First Sport Was Tennis & He Was a Top-10 Junior Player

Surprising as it may be, football was not Rosen’s first sport of choice. While growing up in California, Rosen was a standout tennis player, even achieving  a top-ten rankings among junior players.

He was first introduced to football in elementary school by a friend whose father was a youth coach and he officially switched sports right before the start of high school. There was no turning back after that. Rosen’s mother Liz Lippincott described the switch to The Los Angeles Times:

When he was 4 or 5, he thought (tennis) was the only sport on the planet. I think he realized that on the national level playing tennis meant home schooling and racing around the country on airplanes with his mother.

One thing that never changed, no matter what sport he was playing, was Rosen’s competitive streak. That’s why playing quarterback made so much sense. Rosen wants to be in control, to direct the team and to assure the squad of its success. He can do just that under center.

Read More
5 Fast Facts, College Football, UCLA
He may only be a teenager but Rosen already has the weight of a program on his shoulders. The true freshman will start at quarterback in UCLA's season opener.