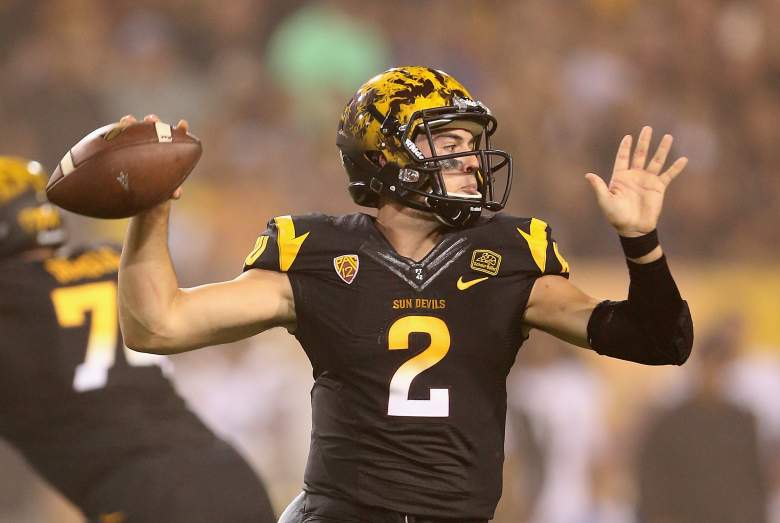 Bercovici has, at long last, earned the chance to start under center at ASU this fall. (Getty)

It is, finally, Mike Bercovici’s moment.

After years waiting for his chance at Arizona State University, Bercovici is slated to take over the starting quarterback job with the Sun Devils this fall and he’s anxious to prove himself on the gridiron. The expectations for Bercovici, who was only ever interested in playing at ASU, are sky-high but the long-time football standout is ready for the challenge. In fact, he’s embracing it.

Here’s what you need to know about Bercovici’s road to the starting job, his family and his social media status:

1. Bercovici Earned the Starting QB Job at ASU This Fall 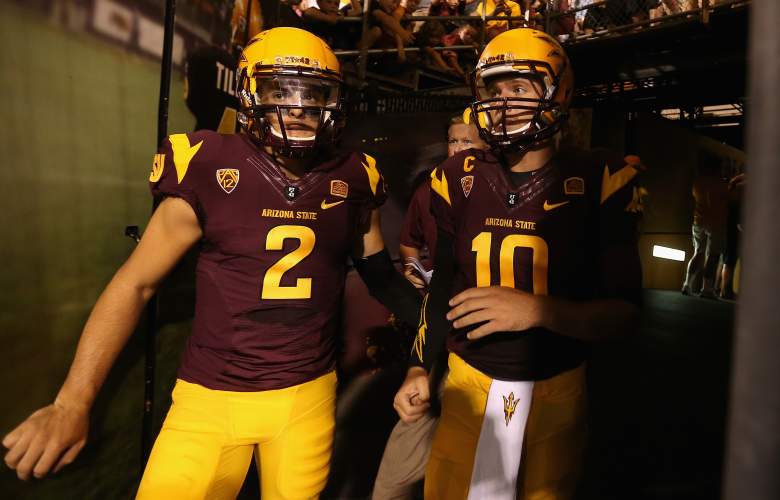 After waiting in the Sun Devils wings for years, Bercovici is finally ready for his moment in the spotlight. The redshirt senior enters the 2015 season with the starting job under center in front of him and the expectations are already through the metaphorical roof.

Bercovici has always been touted for his arm strength but ASU coach Todd Graham has said he expects more from his starter, telling AZ Central:

You don’t want to be known as a guy that has a great arm. You want to be like Tom Brady, Aaron Rodgers. Brett Favre, Roger Staubach. Those guys didn’t just have a great arm. They won championships.

Bercovici knows what his coaches want from him. He also knows what he wants for himself. The long-time player has already been named a team captain and is the de facto face of the program as well as a contender for the Maxwell Award, given to the sport’s top player.

Still, there are concerns. Over the last three years, the Sun Devils offense has been built around Taylor Kelly, a dual-threat quarterback who forced defenses to be ready to play the run every time the ball was snapped. Bercovici doesn’t have that reputation, at least not yet, an the concern is that the ASU offensive line may not give him enough time to drop back and showcase that arm strength.

2. He Grew Up in California & Only Ever Considered Playing at ASU

Bercovici grew up in California, living with his parents Susan and Ben, as well as his sister Danielle, who also attended Arizona State. As a senior at Taft High School, Bercovici completed 240-of-399 pass attempts for 3,755 yards and 37 touchdowns with only nine interceptions. He also recorded 103 net rushing yards and ran for thee more touchdowns.

He racked up two 400-yard passing games and six games with at least 300 passing yards as well as eight games with three or more touchdown passes.

Bercovici was rated the No. 91 overall prospect in the nation in 2010 and ranked the No. 14 pro-style quarterback recruit by Rivals.com. He verbally committed to ASU less than one week after receiving a scholarship offer and never considered any other school. In fact, Bercovici only made one official visit during his recruitment; to ASU. 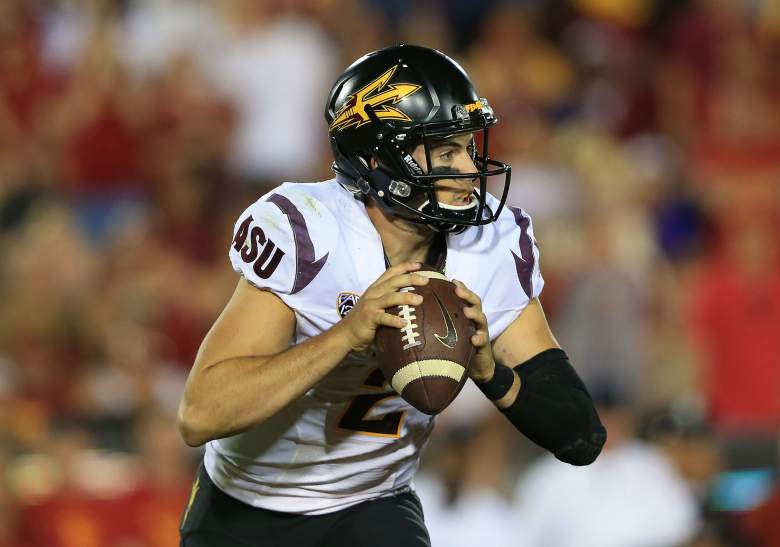 Bercovici had just one season to impress college coaches after being ruled ineligible as a junior. (Getty)

Bercovici’s football career has not been without a bit of controversy. Although his senior season stats at Taft were nothing short of phenomenal, the road to his final year in high school was not exactly a straight line.

In fact, it required more than one road.

Bercovici had previously attended, and played at, Westlake Village High School but lost out to Nick Isham in a quarterback competition and looked to transfer so that he would be able to play. Things didn’t go exactly according to plan though as the Los Angeles City Section ruled him ineligible for a year because the move was deemed to have been made for athletic reason. He called the decision a “pretty interesting situation,” before adding that the move to Taft “was the great decision I made for my football career.”

In the end, after transferring three games into the season, Bercovici missed his junior season and was forced to work out on his own, simply waiting for his chance to return to the gridiron. 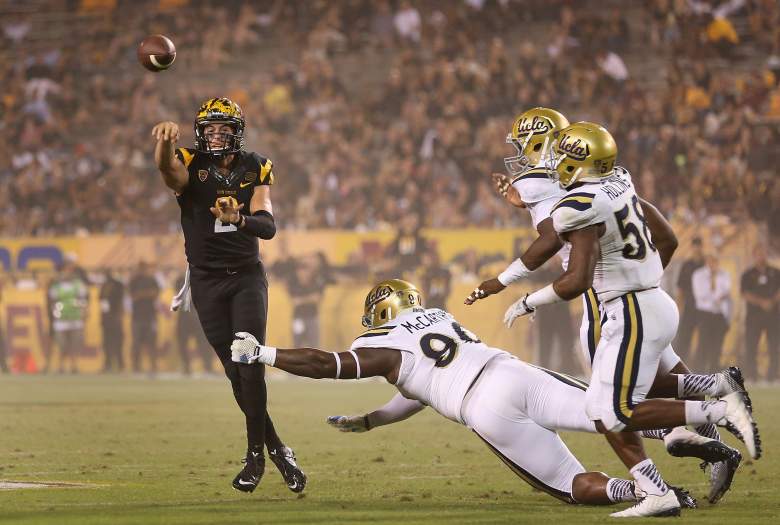 Bercovici got his first college start in 2014, taking on his hometown team, UCLA. (Getty)

Bercovici has not had much on-field experience with the Sun Devils with six combined games in his freshman and junior years, but ASU coaches have been impressed with what he’s been able to do with his chances.

The California native started in three games in 2014, taking over for a then-injured Taylor Kelly, and his impact was impressive. At the end of his junior year, Bercovici finished with 1,445 passing yards and 12 touchdowns, making his first career start on September 25 against UCLA and setting school records for completions and attempts with 488 yards and three touchdowns.

He became the first player to throw for five touchdowns, against USC, and his 510 passing yards in that October game are the second highest against the Trojans in USC history as well.

The life of a starting quarterback.

Bercovici and girlfriend Jaylee Merrill, a Sun Devils dancer, became Internet sensations after the ASU quarterback posted a video of the couple working on routes. It’s attention that Bercovici isn’t quite accustomed to but he said he wasn’t surprised that he was asked about the clip, which took three takes, at Pac-12 media days this summer. He said:

Oh, man, I figured this question would come up. Coach [Todd] Graham loves her — she comes to practice all the time. She watches film with me. She throws routes with me on her off days. She’s a great girl. She likes the attention.

Merrill, who has been dating Bercovici for over a year, was also a dancer at her high school, according to her Facebook profile.