Roy Marble, one of the most decorated basketball players in University of Iowa history, has died after a battle with cancer.

Here’s everything you need to know about the passing of the 48-year-old legend.

Sorry to hear about Roy Marble's passing. Here's my earlier piece on him dying of cancer: http://t.co/BbmYFWsnAs pic.twitter.com/aBhAHmHXRC

After having issues with his eye, as well as headaches, Marble went to the doctor, and it was discovered that he had three tumors in his head.

“I’m scared as hell sometimes,” said Marble, who spoke openly about his fight with cancer and moved his family to his home state of Michigan. “I don’t like this feeling. But if you’re supposed to die, you’re supposed to die. I’m not asking for pity or anything. Every day I get up and fight.”

2. He Remains the All-Time Scoring Leader at Iowa

A standout player growing up in Flint, Michigan, Marble attended the University of Iowa, where he established himself as one of the most dominant players in the school’s history. He averaged 20.5 points per game as a senior and left with a career total of 2,116, which remains a school record.

After Aaron White got to No. 2 on the list, he spoke about Marble’s impact:

He’s arguably the best player to ever play here. Whatever he says, I always take it with great knowledge and try to learn from him. I really wish they would have retired his jersey. To be honest I was a little disappointed that they didn’t. But I’m not the one making decisions. The fact that they acknowledged him was good. He’s a great guy.

Marble led the Hawkeyes to NCAA tournament appearances in all four of his years on campus, including a run to the Elite Eight in 1987.

3. He Had Short NBA Stints With the Atlanta Hawks and Denver Nuggets

RIP to the greatest hawkeye basketball player to ever step foot on that court. A true legend. Ride on Roy Marble. #23 pic.twitter.com/by2jLaVaeR

Following his wildly successful career at Iowa, Marble was drafted by the Atlanta Hawks in the first round of the 1989 draft. He struggled to make an impact in the NBA, however, playing just 24 games in Atlanta and five with the Denver Nuggets several years later.

He played in the Continental Basketball Association until 1995.

4. He Is Survived by 5 Children 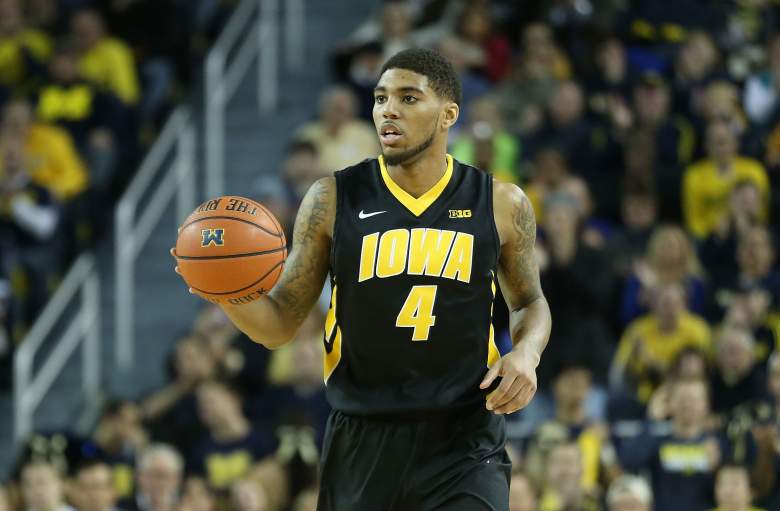 Devyn enjoyed a very good career at Iowa and joined his dad as the first father-son duo in Big Ten history to each score 1,000 career points. He was drafted by the Nuggets in 2014 and subsequently traded to the Orlando Magic on draft night. He spent most of his rookie year in the NBA Developmental League.

Roichelle plays at Wisconsin, while Carlo is a D-1 prospect.

5. He Set Examples For His Children

Although Marble was at times a bit of a controversial figure, he helped instill important lessons in his children. Devyn explained:

My dad didn’t always make some of the best decisions. God put him here and also helped me know right from wrong also. He’s helped me be grounded, too. The mistakes he’s made were made so I don’t make the same mistakes. I know people probably don’t look at it like that, but that’s the reality of life. There’s going to be mistakes that my children won’t make. That’s just how it works.

Read More
Basketball
Roy Marble, one of the greatest basketball players in University of Iowa history, has died after a fight with cancer.