It turns out we were all fooled. There was a lot of speculation as to who would be the celebrity guest picker at Michigan. Derek Jeter, Michael Jordan, Charles Woodson and Eminem were just some of the names that were mentioned as possibilities.

It turns out it was the Head Ball Coach. It was known that Spurrier would appear on Gameday, but it was believed the show would still have a celebrity guest picker. Gameday ended up using Spurrier as both an analyst and later as the guest picker.

He joined a cast of characters that has been full of NBA and country music stars. Draymond Green, John Stockton, Brad Paisley and Eric Church have been some of the celebrities that have joined ESPN’s College Gameday to offer their prediction for the day’s slate of college football games this season.

Spurrier making picks on GameDay- asked about SC-Notre Dame. "Y'all have it wrong on here. USC plays Vandy… I'm going with the Gamecocks."

Twitter had certainly been buzzing on who the celebrity might be. Here was some of the speculation:

According to GameDay staffer, Jeter declined request to be guest picker. Looked into getting Stevie Wonder, too (plays in Chicago tonight).

C'mon…..who could be better than James Earl Jones as GameDay guest picker?? Taking it to a poll in @detroitnews https://t.co/nDJXNtlHeX

Good point brought up by @MGoFish: Michael Jordan could be the guest-picker this weekend. He’s supposed to be at one UM game this year… 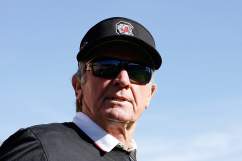 Read More
College Football, Football
College Gameday is in Ann Arbor for the Michigan and Michigan State game. Just who will join Lee Corso and the crew as the celebrity guest picker?