HBO gives us a look at what to expect as we get set for Gennady Golovkin and David Lemieux’s shootout on Saturday night. (Getty)

Slake your thirst for action as we eagerly anticipate Saturday’s big drama showdown between sluggers Gennady ‘GGG’ Golovkin and David Lemieux by checking out HBO’s Road to Golovkin/Lemieux. Watch the entire episode here:

In the 15-minute special we’re taken to GGG’s Big Bear, California compound as he prepares for the upcoming fight and into the relationship between the Khazakh knockout artist and his coach Abel Sanchez.

“Lemieux is a good puncher,” says Sanchez during the special. “But I don’t think he’s ever been punched like Gennady’s going to punch him.”

We also get a look at Lemieux’s home life as a single father to a three-year-old daughter. “They give me a lot of love,” says Lemieux about his two children. “And love gives a lot of energy to do tremendous things.”

And of course, we get a chance to size up the boys ahead of their encounter with training footage and highlights. Click here for a preview of this weekend’s fracas. 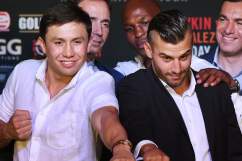 Read More
Boxing, HBO
Satisfy your hunger for action as we await Saturday's showdown between 'GGG' Golovkin and David Lemieux by watching this HBO special on the two boxers.