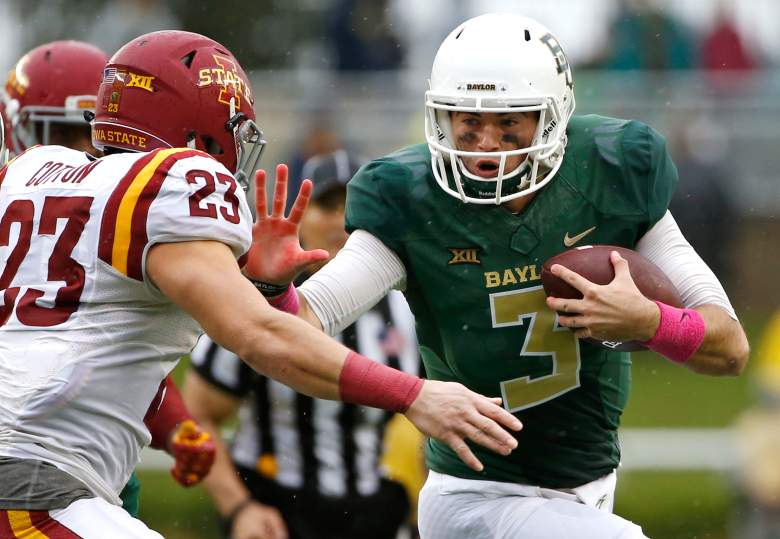 Jarrett Stidham is set to take over as the starting QB at Baylor after Seth Russell’s season ended early with injury. (Getty)

The Baylor freshman quarterback is moving up the depth chart after starter Seth Russell suffered a season-ending injury in his neck last Saturday.

Prayers up to my man @S_Russell17. Great teammate and an awesome dude. Love you big dawg!

Stidham has seen action in several games already this year – coming in after the Bears offense had already wrapped up a victory – but now things are different. Now, Baylor’s playoff hopes may rest squarely on the shoulders of Stidham.

So, who exactly is Stidham and is he capable of leading a postseason run? Here’s what you need to know:

Stidham was one of the most sought-after high school recruits in the country after putting together an impressive four year resume at Stephenville High School. An All-American, Stidham was listed as the country’s No. 13 overall recruit on 247Sports and was a three-time all-state honoree as both a quarterback and wide receiver.

Over the course of his high school career, Stidham racked up 3,903 total yards and 50 touchdowns, including 35 touchdowns through the air. As if that wasn’t enough, Stidham also played basketball and ran track at Stephenville.

Stidham announced his commitment to Texas Tech early in 2014 after his first visit to the campus. (Twitter)

It was the decision that sent shockwaves through the college football world this December. Sidham announced his decision to decommit from Texas Tech via Twitter and, quickly, handed the Red Raiders their biggest loss on and off the field in recent seasons:

Stidham was the centerpiece of Texas Tech’s 2015 recruiting class and the five-star prospect had originally committed to the program in early March after he visited the campus. The decision to leave the program before he got there was a surprise to just about everyone. Stidham hadn’t listed any other school visits on his 247Sports profile and appeared set in his decision.

This past August, Stidham beat out third-year sophomore Chris Johnson for the backup job behind Russell and he quickly impressed the Bears coaching staff. Art Briles described the freshman on signing day this February, saying:

Although it’s the first time he’ll be a legitimate starter, Stidham already has a good amount of game-time experience to his name this season. In fact, he’s appeared in six games already this season.

And in those six games, he’s played pretty well. Stidham has completed 24 of 28 passes for 331 yards and six touchdowns for a QBR of 88.2. “Stidham is the best young quarterback I’ve been around,” Baylor coach Art Briles said. “He’s very polished.”

It’s not exactly an extensive resume, but it’s enough to give the Bears a bit of much-needed confidence heading into the later part of the regular season. Only Oklahoma State’s J.W. Walsh has a higher QBR in the entire Big 12

Stidham and the Baylor QB corps posed for a photo at the school’s practice facility earlier this year. (Twitter)

After wrapping up his high school season at Stephenville High School, Stidham enrolled early at Baylor in January 2015 and participated in preseason team drills, acquainting himself with the offense and moving up to the college level. Now, the Bears are hoping that those extra weeks will help keep Baylor’s offense rolling.

Right now, the Bears lead the nation in scoring (61.1 avg.) and total yards (686.1 per game). It won’t be easy for Stidham to maintain those numbers, but surrounded by a veteran line and multiple offensive playmakers, the freshman is certainly capable of making things happen.