What it's like being married to Joe Maddon, the most interesting man in baseball? "It's always a fun ride," says his wife, Jaye (née Sousoures). "You just don't know what will happen next. You learn to expect the unexpected with Joseph." And what's it like being married to Jaye? "I'm way over my skis with her," says Joe, who admits marrying her is a better moment in his life than winning the 2002 World Series with the Los Angeles Angels. "Sometimes, you just hit gold." While Joe's unconventional methods have made him one of the best managers in the league, Jaye, who is eight years younger, isn't short of impressive accomplishments either. She raised two boys. She graduated from law school at 45. She opened Epic Boxing & Fitness in Tampa Bay, Florida. She does charity work for the Cubs. Essentially, she does a little bit of everything. Click through to learn more about her. (Instagram/EpicBoxingFL) 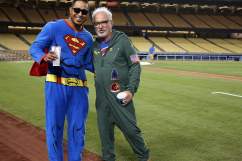 Read More
Chicago Cubs, MLB
Meet Jaye Maddon, the wife of the most interesting man in baseball. She's a mom, she has a law degree, and she's the founder of a boxing gym.