The Nye County Sheriff’s Office has released the audio recordings of the 911 calls made by employees at Dennis Hof’s Love Ranch brothel in Crystal, Nevada, asking for help for Lamar Odom.

The Love Ranch employees called 911 multiple times. You can listen to the audio of the first two calls above.

The former NBA basketball player and husband of Khloe Kardashian was found unresponsive in a suite at the Love Ranch with blood coming from his nose and white foam from his mouth, the sheriff’s office said at a press conference. Odom was taken to the hospital and remains there in a coma, fighting for his life.

Video of the full press conference where the audio was released is available below. The other 911 recordings are played at the 5-minute mark of the video:

The first call was made Tuesday afternoon by an office manager at the brothel, Mitzi John, who asked for an ambulance for a client. She said that Odom was unconscious, but was breathing. He had been found in his private suite by two women.

After hanging up, John called a second time, telling the dispatcher, saying, “they need to hurry please, because there is blood coming out of his nose and white stuff coming out of his mouth.” She says he is not conscious.

Another Love Ranch employee, Richard Hunter, told dispatchers that Odom had used cocaine on Saturday. He also had taken about 10 tabs of “sexual performance enhancers,” believed to be herbal viagra, over three days. Hunter said that Odom was unresponsive and “snoring.” Hunter was told to roll Odom onto his side.

The call was made from the brothel at about 3:15 p.m. He was taken to a hospital in nearby Pahrump. A helicopter came to the hospital to airlift Odom to Las Vegas, but he was too tall to be transported that way. Odom was then driven about 65 miles to the Sunrise Hospital & Medical Center, where he remains.

The sheriff’s office said its investigation is still ongoing and the brothel and its employees could possibly be found criminally responsible. 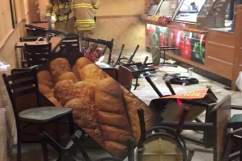