Sorry bro! @detroitslasher #blowncall (if only a ref would have seen it. Oh, wait.) pic.twitter.com/HXfe9zAjil

A terrible call made during the Detroit Lions vs. the Seattle Seahawks game has gotten a huge amount of attention. A blown call would have given the Lions the ball on the goal line with 1:45 to score. But some fans say it’s the Lions’ fault for not realizing the error right away and raising hell.

Here are the tweets and reactions that you need to see:

Per @DeanBlandino: Foul should have been called for illegal batting. Possession should gone back to DET, SEA 1yd-line pic.twitter.com/vN2aThzq5a

Sports officials are MAD. Dean Blandino, the VP of officiating for the NFL, made the statement above. And Skip Bayless tweeted an angry message about the call:

@RealSkipBayless Referees needs to be subjected to fines, suspensions, and job loss. I'm sick of the terrible calls. #DETvsSEA

Here is the exact rule, in case you’re wondering:

2. Fans Are Livid About the Call

Fans are livid about the call. They say it could change the entire outcome of the season and someone should be held accountable. Even Pete Carroll, the coach for the Seattle Seahawks, said during a press conference after the game that the refs had missed that call.

THE #NFL AND THESE HORRIBLE REFS OWE #DETROIT A WIN. WHAT.. A BLOWN… CALL! #lionsvsseahawks #mnf #blowncall #seahawks #week4 #Lions

I cannot believe the @Lions game ended that way. We are cursed. #detroitlions #detroitvsseattle

Caldwell: "We're not going to cry about it." Watch his comments on the controversial call: http://t.co/6GgcYCWhuG pic.twitter.com/0oW0KMEvY1

@espn @SportsCenter @NFL he was gonna throw the flag and then decided against it?!?!? #wow #blowncall #SEAvsDET pic.twitter.com/N68H7fjTpW

Some fans are trying to blame the victim by saying this is still the Lions’ fault, because they should have seen the wrong call right away and raised hell about it. Not a lot of people are jumping on this theory though. Not to mention, this was a “non-reviewable” missed call, meaning even if the Lions had known immediately, they couldn’t have challenged the call.

Hey lions fans — if your players/coaches knew the rule, and immediately made an issue, the refs would have flagged it #DETvsSEA

4. Others Are Calling for Penalties and Fines on the Referees

Many fans are so livid that they’re calling for referees to be subject to fines and penalties if they make game-changing bad calls like that. What do you think?

100% referees and the league needs to be held accountable at some point when mistakes happen. #Lions were screwed tonight. #NFL #DETvsSEA

What a way for the refs to decide the outcome of a close game. Kudos to the refs for ruining it yet again. #blowncall #ESPNMNF #DETvsSEA

Refs royally screw the @Lions How does the @NFL get this wrong? INEXCUSABLE #DETvsSEA What is it w/ controversial calls on #MNF in Seattle

5. Meanwhile, Quite a Few Memes Are Being Born

These four pictures describe being a Lions fan pic.twitter.com/JFQ4sicDdE

This call is uniting a lot of fans in creating some hilarious memes, such as the one above. Here are some more: 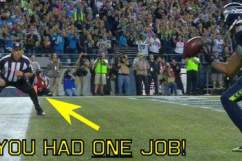 Read More
Breaking News, Sports
Fans and officials are livid about the blown call during the Detroit Lions vs. Seattle Seahawks game. Here are the tweets and reactions you have to see.