The death of one of the greatest rugby players has shocked the sports world. New Zealand legend Jonah Lomu died on November 18. He had suffered for years with a rare kidney disorder.

In a touching statement given to the New Zealand Herald, his passing was announced by his wife Nadene. It read, “It is with great sadness that I must announce my dear husband Jonah Lomu died last night. As you can imagine this is a devastating loss for our family and may I ask that our privacy, especially the privacy of our two young boys, be respected as we take them through this traumatic time.”

Here’s what you need to know about the love of Lomu’s life:

1. Nadene Was Lomu’s Mistress During His Second Marriage

Jonah pictured with his second wife Fiona in 2007. (Getty)

The couple met in 2007 in New Zealand when Lomu was married to his wife of four years, Fiona Taylor. They began an affair together. At the time, Nadene was also married to New Zealand rugby up-and-comer Jarek Goebel. He told the New Zealand tabloid Stuff “Jonah’s Walked Off With My Wife.”

Goebel and Nadene had married in April 2007. Goebel said at the time “I’m not like Jonah … I mean how many girls and weddings has he had. My marriage has always come before my sport. Family is always first. Marriage is No 1. I am pretty private and I don’t really want to bare my soul about how I really feel. It’s been a hard time. I could make Jonah look a dick, but I’m not going to.”

In December 2007, Lomu and Fiona Taylor announced that they were having problems in their relationship. Then, Lomu and Nadene confirmed the romance, eventually marrying in 2011 in Wellington and having two sons.

She told Womens Weekly at the time “I’m madly in love with Jonah. With our two boys, marriage just completes the package.” When Lomu went to play in France at the end of his career, Nadene relocated with him, reported the Guardian in 2010.

They joined the mormon church prior to their wedding and married in a Church of Jesus Christ of the Latter Day Saints ceremony, reported the New Zealand Herald. Traditionally, members of the church give 10 percent of their income to the faith. 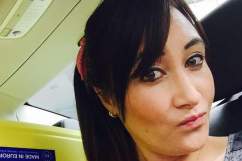 2. She Was in a War of Words With Lomu’s Ex-Wife Over Use of the ‘Lomu’ Name

Things were not plain sailing the couple’s relationship, in 2011, Fiona Taylor got into a dispute with Lomu and Nadene, reported the New Zealand Herald at the time. The issue stemmed from Taylor insisting on using the Lomu name for her business, while claiming Jonah Lomu as a client and featuring a testimonial from the Rugby great.

The two then got into a beef on Twitter, reported Stuff, after Nadene made it clear that she wouldn’t take Lomu’s last name until Fiona Taylor dropped it. Eventually, Lomu’s ex ditched the name. One tweet from Nadene told Taylor to “move on.”

3. The Couple Had 2 Children Together Despite Doctors Giving Lomu a ‘0.001% Chance of Having a Child’ After Intensive Kidney Therapy

Due to this kidney issues and treatment, Lomu told the Guardian in 2010, that doctors had given him “0.001 percent of having a child.” He described the moment when Nadene told him she was pregnant saying “I never, ever, thought it would happen. When Nadene told me she was pregnant I was lost. Like duh, um, what? It just sort of went over my head and then about 20 minutes later it hit me.”

The couple had two sons together, Brayley, 6, and Dhyreille, 5. Memorably, during the 2015 Rugby World Cup in England, Lomu performed the famous Haka dance for his sons, you can watch the clip above. He told Radio New Zealand in September 2015 “My two sons have never seen me do the haka before and this has brought it to life for me. It is something special for them as previously they have only seen videos of me doing it. He spoke in that interview about his poor health and about how he wanted to his sons turn “into grown men.”

4. He Credited Nadene With Reuniting Him With His Estranged Father

Lomu with his first wife, Tanya, in 1997, at the unveiling of a waxwork of the great player in Melbourne, Australia. (Getty)

In his 2010 Guardian interview, Lomu talked about his relationship with his father, Semsi. He reunited with his dad after the birth of Brayley with Nadene being the driving force, the Guardian article reads “It was Nadene who insisted that he break that silence and so, with his partner three months pregnant, he boarded a plane to arrive unannounced at the family home in Mangere, Auckland.”

Lomu later told Women’s Weekly “If Nadene hadn’t made me mend my relationship with Dad, he would have passed away without my ever fixing the rift.”

5. Lomu’s Last Tweets Sent Out Messages of Love to Paris From Dubai

"Sois Fort" Paris, France Your all in our hearts and minds At this time . Ofa atu Jonah & Nadene ,Brayley & Dhyreille Lomu

The legend’s last messages on his Twitter page came from Dubai. She’s mentioned in one of his tweets of support in the wake of the Paris Terrorist Attacks. According to her Twitter page, she was in Dubai with her husband.

According to Lomu’s official website, Nadene works as the director of his worldwide brand.

Read More
5 Fast Facts, Breaking News, WAGs
The tragic loss of Rugby great Jonah Lomu at the age of 40 was announced to the world by the love of his life, Nadene.