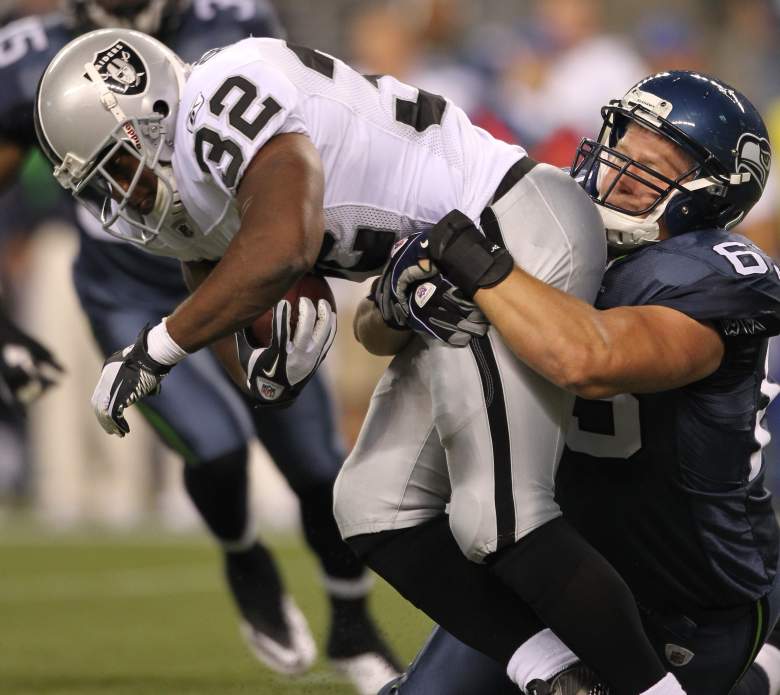 Former NFL first-round draft pick Michael Antwon Bennett was arrested on Thursday on suspicion of stealing about $325,000 by taking out fraudulent loans against the value of his girlfriend’s parents house.

The former Oakland Raiders running back was being held at the Sonoma County Jail in California in lieu of $1 million bail, according to a report by the Press Democrat. Here’s what you need to know: 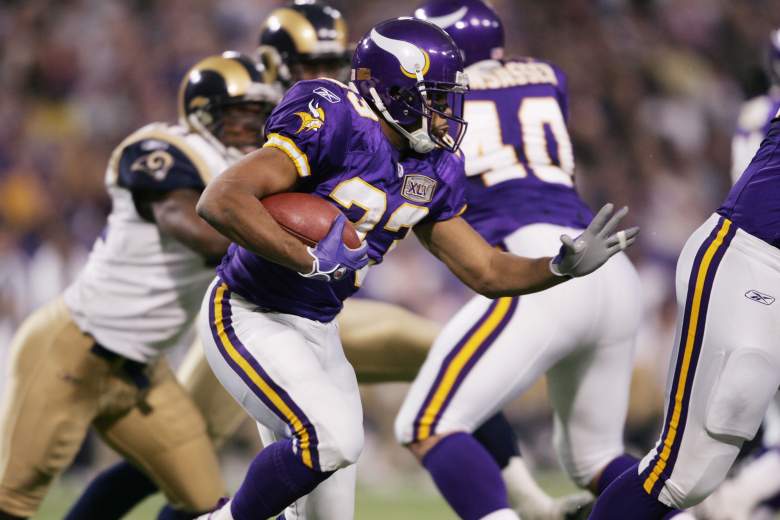 Michael Bennett, a former first-round pick, was arrested on Thursday night on suspicion of fraud. (Getty)

Bennett, 37, was arrested on suspicion of suspicion of grand theft, burglary, forgery and elder abuse for financial gain after he took out two loans worth more than $300,000 according to Sgt. Ed Crosby of the Petaluma Police Department.

Crosby said that parents of Bennett’s girlfriend, who requested no to be named in the investigation, discovered the loans in September when a financial institution mailed them statements. Crosby described the situation to the media:

The parents received mail from brokers saying, ‘Hey you got this loan,’ but they hadn’t taken out any loans. It looks like he used the money to purchase at least one vehicle and go on some shopping trips.

The victims, both over the age of 65, began their own investigation after discovering Bennett’s fraud and realized they were missing a binder of financial documents they had kept in a locked room.

2. Bennett Was on Federal Parole After a 2012 Wire Fraud Conviction 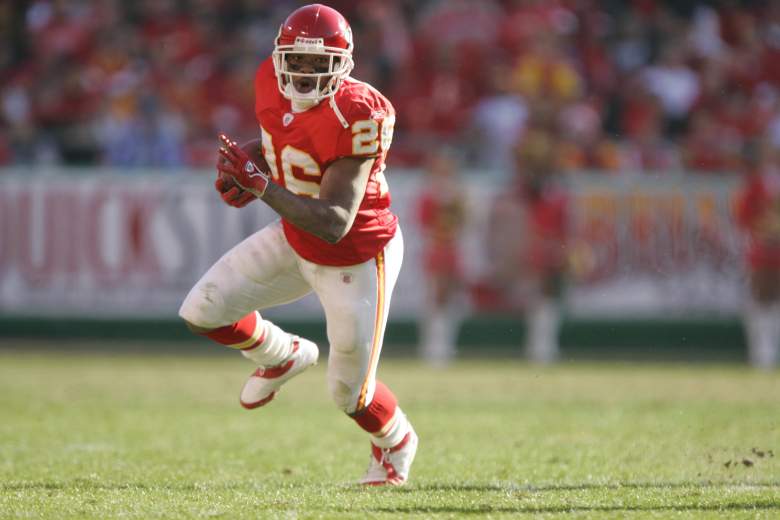 Bennett was on parole for a previous fraud charge when he was arrested on Thursday. (Getty)

Shortly after his NFL career ended in injury, Bennett, then 34, found himself back in the headlines after being convicted for his role in a Florida fraud scheme.

Bennett used a falsified banks statement that claimed he had $9 million in collateral for the loan and, according to the FBI, was arrested after returning to collect a cashier’s check worth $150,000. A federal judge sentence Bennett to a 15-month prison term and he was still on parole when he was arrested on Thursday night.

3. Bennett Reportedly Admitted to the Crime When Confronted by Police 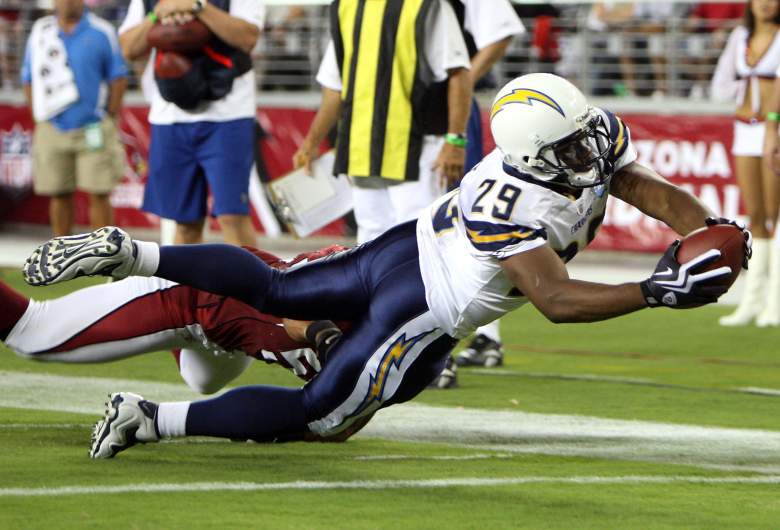 Bennett was reportedly cooperative with police when he was arrested. (Getty)

According to Crosby, Bennett immediately admitted to the crime when approached by authorities on Thursday night.

The former NFL standout is being held on $1 million bail and is expected to be arraigned on Friday. Investigators have not yet discovered how much of the fraudulent loan amount is left.

Crosby added that while this type of refinancing scheme is common, it doesn’t normally include this amount of money. “The amount of money is certainly unusual. We don’t see many that are quite that much,” Crosby told the Press Democrat. “But we do see five-figure cases like this all the time.”

4. His Lawyer Claimed It Was ‘Financial Desperation’ That Led to the Crimes 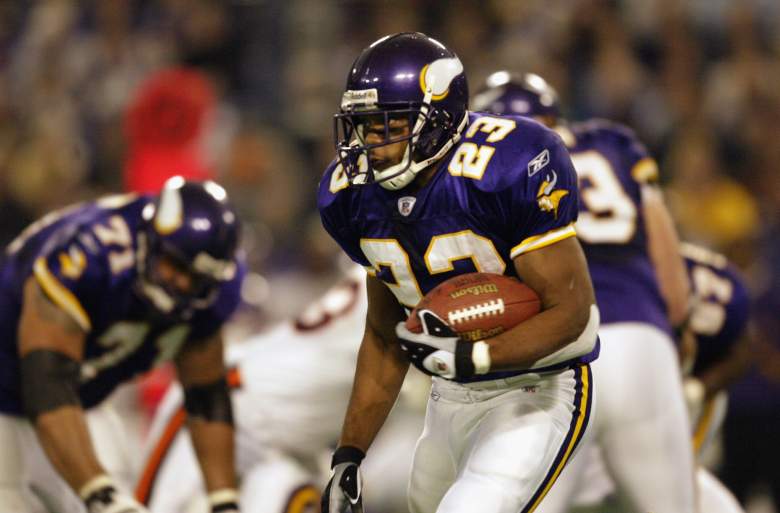 Bennett was selected to the Pro Bowl in 2002 after his second season in the NFL. (Getty)

Crosby explained that people committing this type of financial fraud are very rarely strangers to the victim. In this case, Bennett and his girlfriend were actually living in another home owned by the victims.

Of course, this is also not the first time that Bennett has been involved in a fraud case. At the time of his previous sentencing, his lawyer said it was “financial desperation” that led to the crime. This time, Crosby added that he assumes Bennett blew all the money he made in the NFL.

“If he didn’t, I don’t know why he would do this,” Crosby told the San Francisco Chronicle, “but people sometimes do strange things.”

5. Bennett Played for Six NFL Teams During His Nine-Year Career

Bennett was the 27th overall pick in the 2001 NFL draft, selected by the Minnesota Vikings out of the University of Wisconsin. Bennett was quick to impress from the get-go, running an almost ridiculous 4.13 in the 40-yard dash during his pro day. He played five seasons with the Vikings before being traded the Kansas City Chiefs in 2006.

Over the course of his nine-year career, Bennett also played with the Tampa Bay Buccaneers, San Diego Chargers and wrapped up his time in the NFL with the Oakland Raiders. 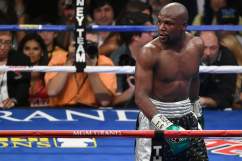 Floyd Mayweather Net Worth: 5 Fast Facts You Need to Know