An explosion happened during France’s international friendly game with Germany, not that it matters in the absolute slightest but France won 2-0. It followed a gun attack on a restaurant and a hostage situation at a concert hall in Paris where “more than 100 people” were dead in total, reports The Daily Telegraph’s Henry Samuel.

CNN reports that 149 people are dead in total in Paris. Meanwhile the AFP reports that 1,500 extra French soldiers have been deployed on the streets of their nation’s capital.

Other attacks were carried out at four other locations in central Paris, after the suicide bombings at the stadium, which killed at least four people, police say.

This is the aftermath of the bomb that the fans inside the stadium initially cheered:

After the attack, the stadium was evacuated:

Evacuation of Stade de #France after multiple explosions and intense gun fire hit the city a while ago.. #Paris pic.twitter.com/5xpeYFEXC1

He added that the streets around the Stade De France stadium in Saint Denis, a Paris suburb, were then closed.

The reports from Paris are harrowing. Praying for the city and families of the victims. -H

This is video of the gunfire from within the streets of Paris tonight:

Read more about where the other attacks occurred at the link below:

In something of a response to the attacks, the arch at Wembley stadium in London was turned into the colors of the French flag:

Wembley have changed the colours (previously India flag) to tricolour in tribute of Paris Attacks pic.twitter.com/q3D09Z5D36 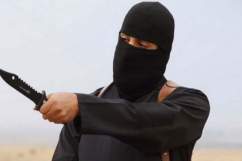 Is Jihadi John Dead? 5 Fast Facts You Need to Know