The Raiders hope to continue their hot start against a Pittsburgh team that is reeling without one of their stars.

TV Channel: The game will be broadcast on CBS for most of the nation, with Ian Eagle and Dan Fouts on the call. Click here to check and see if you’re within the game’s coverage area.

Game Preview: Last year the Raiders were a joke. This year, they silenced the laughter. The Raiders youth movement is starting to pay off, and Jack Del Rio’s team has started the season 4-3. After an impressive win against the Jets last week, a look at the standings have Oakland right in the thick of the playoff race.

Adjacent to them in the standings are the Pittsburgh Steelers. It’s been a wild ride to 4-4 for Pittsburgh, and it’ll continue without one of the NFL’s best running backs. Le’Veon Bell’s MCL will certainly hinder the Steeler’s offense, but it won’t break them thanks in part to DeAngelo Williams. Williams is plenty capable of handling the ball and while he doesn’t have the breakaway speed and quickness that Bell has, he’s a proven veteran who doesn’t make many mistakes. 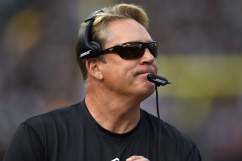 How to Watch Raiders vs. Steelers Live Stream Online