It’s a true clash of the titans when unified champion Wladimir Klitschko defends his smorgasbord of world titles this Saturday against Tyson Fury in front of over 40,000 fans at the ESPRIT Arena in Düsseldorf, Germany.

Read on for your odds and favorite, and a prediction.

Betting Odds and Favorite to Win

Klitschko (64-3, with 53 KOs) enters the bout a favorite to win in Vegas and on online sportsbooks (see below). But Tyson Fury is, well…he’s Tyson Fury, and who knows what he has planned for this weekend.

“This fight is about many things for me,” said Fury (24-0, 18 KOs) via press release. “It’s about fulfilling my goal of becoming world heavyweight champion, it’s about staying undefeated and winning just another fight, and it’s also about beating Wladimir Klitschko.”

Ok! Let’s get it on. Here’s how the bookies are calling it:

39-year-old Ukrainian giant Wladimir Klitschko, who stands 6-feet 6-inches and is currently riding a 22-fight unbeaten streak, since his last defeat at the hands of Lamon Brewster in 2004, will be looking to extend his nine-year reign as a titleholder on November 28– second only to Joe Louis’s record of 11 years. Klitschko made his last appearance in the ring with a unanimous decision win of Bryant Jennings in April.

Fury, a 27-year-old from Wilmslow standing 6-foot 9-inches, United Kingdom was last in action with four stoppages in a row– over Christian Hammer, Dereck Chisora, Joey Abell, and Steve Cunningham.

Like I said before, anything can happen in Saturday’s encounter with somebody as unpredictable as Fury in the ring. Wlad’s chin has been suspect, and Fury does carry decent power and an awkward style. Include the fact that one punch can make all the difference when you’re talking a pro heavyweight fight, and those number from Vegas start to look a bit wide.

But I still expect Dr. Steelhammer to hold on to his IBF/IBO and The Ring Magazine world heavyweight belts and WBA/WBO Superchampion titles after he gets a fix on the rangy Brit by the second or third round and catches him with a fight-ending hook or straight right early in the second half of the fight. 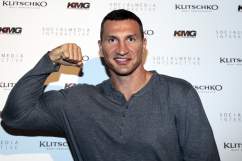 Read More
Boxing, HBO Sports, Sports Betting
Wladimir Klitschko defends his smorgasbord of world titles this Saturday against Tyson Fury. We have your odds, favorite to win, and prediction.