Injuries continue to run rampant through the NFL. After Le'Veon Bell, Steve Smith and Keenan Allen suffered season-ending injuries last week, there were a number of new casualties in Week 9. Dion Lewis went down with what looks like a serious knee injury. Latavius Murray may have suffered a concussion. LeSean McCoy suffered a shoulder injury and will be questionable on Buffalo's short week. Ben Roethlisberger was carted off with a foot injury. Clearly, no one is safe at this point. While some of the backup situations in these cases are a bit murkier than others, the array of injuries will still make for a number of intriguing waiver-wire adds for Week 10. Even with McCoy claiming his injury isn't serious, Karlos Williams' 110-yard, two-touchdown performance puts him at the top of the list. But if he's already owned, there will be plenty of other choices. Click to the right for the full list of potential adds this week. (Getty) 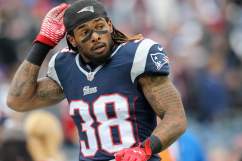