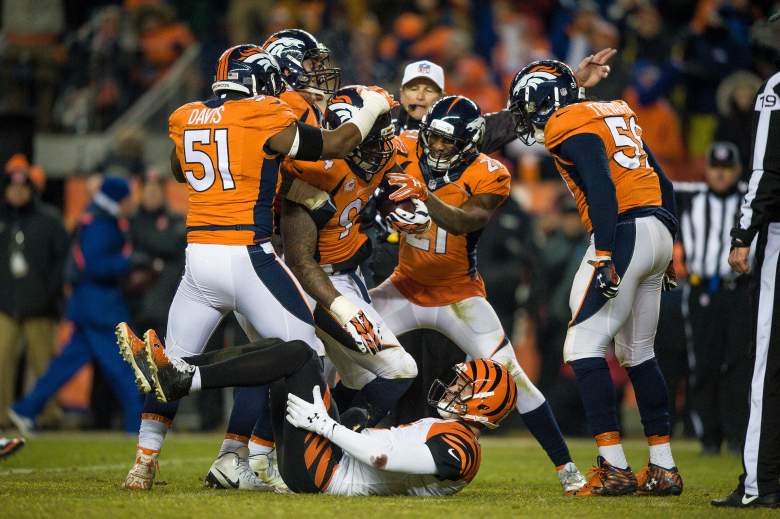 The Broncos are headed to the playoffs. (Getty)

The Denver Broncos are officially headed to the NFL playoffs. The Broncos came away with a 20-17 overtime victory against the Bengals on Monday Night Football in a game that went back and forth the entire night.

Denver had an opportunity to win the game in regulation but Brandon McManus missed a 43-yard field goal to send the game into overtime. McManus redeemed himself in overtime by making a field goal to give the Broncos the lead.

The game ended on a botched snap by the Bengals as the Broncos recovered the fumble. It occurred the play after a controversial call ruled a potential Bengals fumble an incomplete pass.

The Broncos are now in the driver’s seat for a first round bye in the playoffs if they can win their final game of the season against the Chargers.

Here is how the Broncos came away with the victory:

The Bengals Scored a Touchdown on the Opening Drive

It was the perfect way to start the game for AJ McCarron. McCarron led a long, sustained drive that resulted in a short touchdown pass to A.J. Green.

Sanu Found the Endzone on a Quarterback Keeper

Mohamad Sanu took a direct snap for the Bengals near the goal line. He ran the ball to the left side and went into the endzone untouched to give the Bengals a 14-0 lead.

Touchdown! Brock Osweiler to Emmanuel Sanders. 2nd half adjustments on point in this game so far. #Bengals 14 #Broncos 10.

Osweiler found Emmanuel Sanders in the endzone for the Broncos first touchdown of the game. It was a great way to start the second half and cut the Bengals lead to 14-10.

Anderson broke off a 39-yard run for a Broncos touchdown early in the fourth quarter. It gave Denver their first lead of the game.

Brandon McManus for the win and he misses it… by a lot. pic.twitter.com/SW3hvgaQAa

McManus had an opportunity to win the game for the Broncos on a 43-yard field goal. McManus missed the kick badly to the left and sent the game into overtime.

The Bengals Fumbled the Ball to End the Game in Overtime

The Broncos are headed to the NFL playoffs thanks to a blown snap by the Bengals. The botched snap occurred in overtime after the Broncos had already made a field goal. It immediately ended the game and gave the Broncos the victory.

The play followed a controversial call where it appeared the Bengals had fumbled. After review, it was ruled an incomplete pass and gave the Bengals new life. The very next play the Bengals fumbled the ball to end the game.