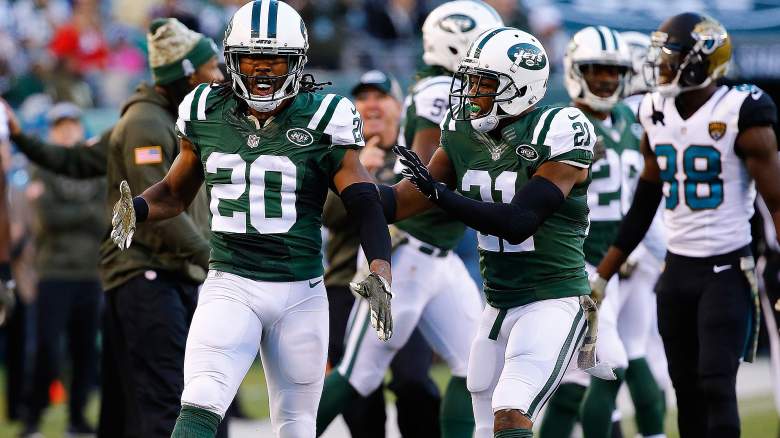 The New York Jets are looking for a victory and another push at a postseason berth this afternoon. (Getty)

The New York Giants and New York Jets play each other for the first time during the regular season since 2011 this afternoon. Remember what happened during that 2011 game?

Big Blue won the game, turned its season around and, eventually, went on to win the Super Bowl.

Now, a victory here might not do the same exact thing, but the Giants desperately need a win, particularly after last week’s vaguely awful performance against the Washington Redskins. And while there’s no Victor Cruz this year to notch 99-yard touchdowns, there is Odell Beckham Jr. who has scored five touchdowns in his last four games and has 21 touchdown receptions since week five of last season. That’s three more than any other player in the league and particularly interesting considering the Jets won’t have Darrelle Revis on the field.

Here’s everything you need to know about the MetLife matchup:

TV Channel: Locally broadcast on CBS with Ian Eagle and Dan Fouts on the call. Click here to see if you fall within the TV coverage zone.

Game Preview: In a season filled with almosts and not-quites, the New York Giants offense has one seemingly constant problem; its run game.

Big Blue doesn’t have one top running back and hasn’t even hinted at picking one. Instead, the Giants have played running back by committee. Rashad Jennings has shown flashes and Oreans Darkwa had a bit of a breakout game against the Cowboys, but, still, New York hasn’t found one consistent guy to turn to on the ground.

The Jets are one of only three teams to hold opponents to less than 1,000 yards on the ground this season. Gang Green’s defensive line has been dominant throughout the season and are regulars are breaking into the backfield.

So, how do the Giants make sure their backs can get going this afternoon? Commit to the run. This has to happen and the offensive line has to help make it happen as well. With guys in the trenches starting to get healthier ahead of the inter-stadium tilt, Big Blue might just be able to rack up the rushing yards.