According to the Boston Herald, Jones, 25, arrived at the Foxboro Police Department at 7:42 a.m. Dispatch records show Jones was taken to Norwood Hospital at about 8 a.m. for an undisclosed medical emergency, the newspaper reports. He was released from the hospital the same day.

The Boston Globe reported Wednesday that Jones had a bad reaction to synthetic marijuana. Jones has practiced all week.

You can listen to the police and fire dispatch audio, obtained from Broadcastify.com and edited by Heavy.com to remove dead air, below:

In the audio, the dispatcher tells an officer to respond to the back parking lot of the police station saying he is “not sure of the situation.” The officer responds, “we’re out, we’re out.”

After an unrelated fire call for a “lift assist” is heard on the audio, the officer asks for medics to respond to the front lobby area for a “confused party.” The dispatcher then summons the fire department for a “medical emergency” at 7:42 a.m.

While firefighters tended to Jones, an officer was sent to his home, which is just blocks away, according to the Herald. An officer can be heard telling a dispatcher, “I got his keys off the kitchen table, I was able to lock the front door. If you want to just pass along to the fire, he was definitely involved with class D delta before this happened, just so they know.”

It’s not clear what the officer is referring to when he says “class D delta.” In Massachusetts law, “class D” is a classification of drugs that includes marijuana, among others. You can see a full list here. “Delta” is the phonetic alphabet code word for the letter d.

Synthetic marijuana, which was the drug Jones used, according to the Globe, is a class D substance.

WEEI’s “Dennis and Callahan Show” tweeted that Jones “OD’d on pills,” citing police sources. An earlier tweet claiming the overdose occurred at the home of Patriots’ tight end Rob Gronkowski was deleted by the radio show.

Lou Merloni, a former Major League Baseball player who now works for WEEI, tweeted that a source told him Jones “walked into police station parking lot all jammed up shirtless and shoeless asking for help from police.”

According to the radio communications, Jones was taken to Norwood Hospital just before 8 a.m. by ambulance. The rescue said they were taking Jones “ALS,” which stands for advanced life support.

On fire dispatch recordings from the same time period, which you can listen to below, the dispatcher is asked to send the rescue to the front parking lot for an evaluation, “medical, uhh, mental.”

Foxboro Police Chief Edward O’Leary initially told the Herald that his department didn’t have any interaction with Jones over the weekend, but the Herald found dispatch records that showed otherwise. The dispatch report was modified Tuesday afternoon, after the Herald called the department. O’Leary told the newspaper that was to delete medical information.

“It’s protected information on a medical condition,” O’Leary told the Herald. “Officers get training in making sure it’s information that’s not to be disclosed. I trust my lieutenant to know the difference.”

Here's a statement from the Patriots regarding Chandler Jones pic.twitter.com/vCJMsuATbo

The Patriots said in a statement, “Chandler Jones was admitted to the hospital on Sunday and released that day. He reported to work on time Monday morning and has participated in all meetings and practices since then.”

Jones is in his fourth season with the Patriots, who are set to play the Kansas City Chiefs on Saturday in Foxboro in the AFC Divisional Round of the playoffs. Jones, a Pro Bowler this season, is fifth in the league with 12.5 sacks. He missed New England’s last game, on January 3, against Miami with a toe injury. 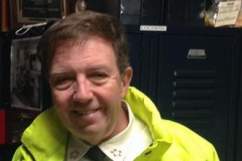