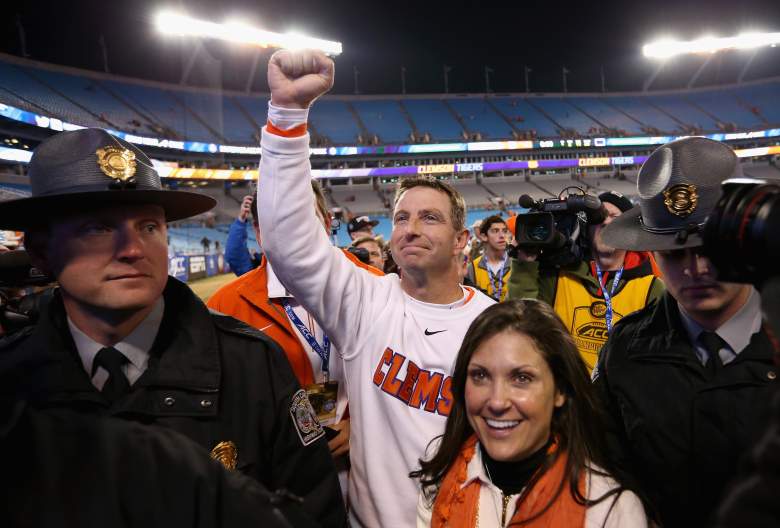 Dabo and Kathleen Swinney after a big Clemson victory. (Getty)

The eyes of the nation are on Clemson coach Dabo Swinney as the Tigers take on the Crimson Tide in the national championship game. As fate would have it, Dabo’s biggest professional moment will collide with his most significant personal moment.

Dabo and his wife, Kathleen, both went to the University of Alabama. According to ESPN, he proposed to Kathleen in Tuscaloosa where the university is located.

While Swinney looks to defeat the team in crimson and white tonight, he once wore those colors proudly. While Dabo and Kathleen were in Tuscaloosa, he walked on as a football player.

The couple knew each other in grade school and were high school sweethearts. They decided to attend Alabama together.

Dabo’s journey to create the stable family he has today was quite the pilgrimage. His father was an alcoholic and left the family in dire circumstances. According to ESPN, he and his mother, Carol, struggled financially, and Kathleen was an encouragement to Dabo during the hard times. Leading up to the championship game, Dabo’s brother, Henry “Tripp” Swinney III, was arrested and charged with aggravated stalking in Florida.

Today, Kathleen and Dabo have three sons, but the Clemson football team serves as their adopted family. Kathleen is active in helping support the Clemson’s players lives off the field and the family’s charitable endeavors.

The two also created a foundation which focuses on breast cancer research. It is something that is close to their hearts as Kathleen lost a sister to breast cancer.

Tonight they will be wearing bright orange and fighting against the school that has meant so much to them both.

Read More
College Football, Football
Dabo and his wife, Kathleen's, journey to Clemson ran through Tuscaloosa where Dabo was a walk-on football player at Alabama. Learn more about the Swinneys.