Born just one week apart, Andy Murray and Novak Djokovic are currently ranked as the two best men in tennis. After they meet for the 31st time today in the Australian Open final, they will have a combined 13 Grand Slam tournament wins between them.

Of course, most of that total comes from Djokovic, who currently stands at 10. The Serbian has continued to elevate his game against the world’s best, defeating Roger Federer in the semifinal to defend his title in Melbourne. Djokovic has won the Australian Open four of the previous five years, with three of those coming against Murray.

With the win over Federer, Djokovic now has a winning record over the ‘Big Four’ in tennis- Federer, Nadal, and Murray. His 11th title would rank him fifth all-time, joining a tie with Rod Laver and Bjorn Borg. Djokovic is still one short of the career Grand Slam, having reached the French Open final three times but never claiming victory.

Murray has won two majors in his career, both of them coming against Djokovic. Murray ousted Joker at the 2012 US Open final, and then again at Wimbledon in 2013. Murray also defeated Djokovic at the 2012 Olympics in the gold medal match played at Wimbledon. 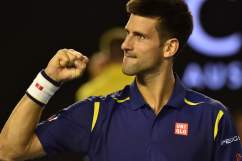