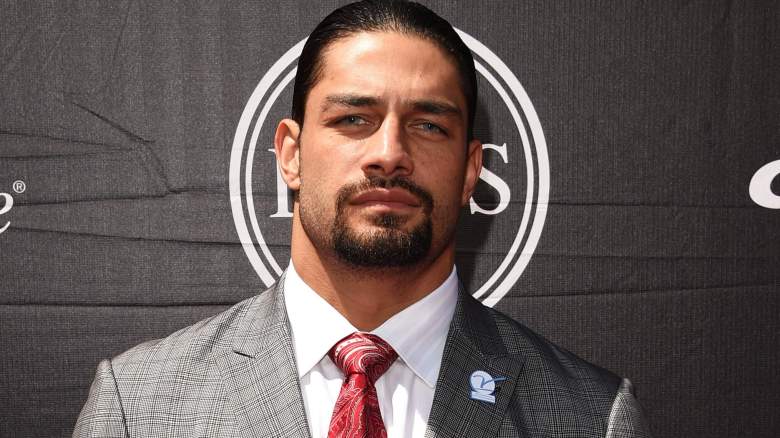 Roman Reigns is quite the family man when he isn’t taking down opponents in the ring. (Getty)

Roman Reigns is one of the toughest wrestlers in all of the WWE. He hits hard and he hits often and, right now, he’s prepping to defend his WWE Championship.

But, when he isn’t in the ring, when he isn’t taking down opponents or even punching his boss, Reigns is one of the most stable family-men in all of sports.

Reigns, whose real name is Leati Joseph Ano’i, and Galina Joelle Becker have been together since they both attended Georgia Tech, but the pair finally made it official in December 2014.

Becker is an athlete in her own right and was a standout track and field star with the Yellow Jackets, excelling in hurdles and jump events. The San Jose, California native posted an outdoor season-best mark of 38’2.75” in the triple jump at the Auburn Tiger Classic in the 2006-07 season. Speed runs in Becker’s family as well. Her older sister Undine Becker ran track at Stanford from 2001 to 2005.

Baker and Reigns are parents to one daughter together, Joelle, who they both refer to as Jojo. When the two tied the knot in 2014, Jojo was a major part of the ceremony. Reigns is an incredibly hands-on dad and regularly posts updates about his family on his social media pages.

However, that doesn’t mean he always enjoys seeing his family in the spotlight. Reigns wasn’t always pleased when his daughter was actually used in his feud with Bray Wyatt in late 2015, saying:

[The picture] wasn’t something that came from my home or private, like, me and [Joelle] selfie or something like that. It was a promotional thing that we did. It’s in the malls. You can probably see it on my Twitter, so that’s why I was okay with that…. It was something to spark, but too much is too much and I thought we were able to push a line and stay there and not go too far and we were able to go back towards the wrestling and the talent and us telling our individual competition story [as] opposed to getting too deep into that type of real life situation.

Still, family is a major part of Reign’s persona, both in and out of the ring. In fact, when he won his WWE title in 2015, Reigns dedicated the victory to Jojo.

Read More
WAGs, WWE
He may be a hard-hitting force in the ring, but away from wrestling Roman Reigns is nothing short of a family man. Learn more about that life right here.