#instabooty if #2016 keeps going like this then I'm going to be one happy happy girl! #bootypaint #siswimsuit

The Sports Illustrated Swimsuit Issue is shooting now for a press date in April, and SI Swimsuit Editor MJ Day shared a photo on her Instagram account that may hint at a very big name gracing the popular bodypaint section. Day posted an Instagram photo January 5 of what appears to be former UFC champ Ronda Rousey wearing nothing but bodypaint.

While Day has not confirmed that the photo is of Rousey (who did appear in the magazine’s 2015 edition), the tattoo on the model’s right wrist corresponds to the known kodokan symbol on Rousey’s wrist, seen here:

The photo is an intriguing start to 2016 for Rousey, who had one of the most event-filled years you could imagine in 2015. Rousey rose to superstar status and became the postergirl for UFC during its most successful stretch in history, only to lose her bantamweight title to Holly Holm at UFC 193 in November.

Rousey has laid low for the most part after the UFC 193 loss, but she’ll likely spend plenty of time this year in the spotlight, especially if she’s able to reclaim her title in a widely expected rematch with Holm. 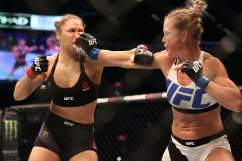 Ronda Rousey vs. Holly Holm Rematch: Will They Fight Again?