The Texans know how to create home-field advantage. Houston has hosted two Wild Card games in their young franchise history, and they are unbeaten in those contests. They go for three straight today against the Chiefs, who enter NRG Stadium on a ten-game winning streak.

Houston is bringing out the big names for today’s playoff contest. Before the game, two of Houston’s greatest athletes will lead the Texans. Craig Biggio is the “Homefield Advantage Captain,” and two-time Heavyweight Champion George Foreman will be with the team for the coin toss.

Kelly is a former YouTube sensation, and has turned her internet following into a serious career as a singer/songwriter. She has been nominated for a Grammy Award for best new artist, and her debut album Unbreakable Smile exceeded expectations and sold the equivalent of 75,000 units.

If that wasn’t enough musical talent, just wait for halftime. Grammy Award Winner Lil’ Jon is in the house, and he’ll perform “Turn Down for What” at halftime. The song is used often in the stadium, as it is traditionally played after a J.J. Watt sack. 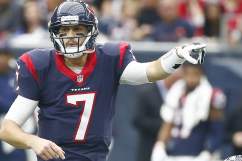